Currently, this feature is behind the feature flag NG_SVC_ENV_REDESIGN. Contact Harness Support to enable the feature.Harness CD supports all of the major platforms and we're adding more all the time.

In some cases, you might be using a platform that does not have first class support in Harness, such as OpenStack, WebLogic, WebSphere, Google Cloud functions, etc. We call these non-native deployments.

You'll learn how to:

The tutorial should only take about 15 minutes.

Here is a summary of the steps for setting up custom deployments using Deployment Templates:

That's it. Your Pipeline will fetch the target instances as you requested and deploy your artifact to them.

Unlike the deployments for supported platforms, like Kubernetes and AWS, Deployment Templates have certain limitations:

You can add your own scripts or tests to your Pipelines to describe deployments, check steady state, and track releases. For example, using the Shell Script or HTTP steps.

The Deployment Template is composed of two major sections:

For this tutorial, we'll only use some of these settings, but the rest of the settings are described in Notes.

In Fetch Instance Script, you enter the script to pull the JSON collection of target instances from a server or service.

The script is expected to query the server and receive a JSON array containing the target hosts, saved in the file $INSTANCE_OUTPUT_PATH.

This shell script will be executed at runtime by the Harness Delegate on its host. This should be a shell script you have run on the Delegate host to ensure that the host can connect to your server(s).

The script should return a JSON array containing the target host information Harness needs to deploy.

The script you use depends on the platform you're using.

For this tutorial, we want to deploy to all the Kubernetes pods in the namespace example, so our script looks like this:

If you want, you can replace the namespace harness-delegate-ng with a namespace in your own cluster that has pods that can be fetched.

Important: The $INSTANCE_OUTPUT_PATH expression must come last. You can enter the script inline, or use the Harness File Store to store it in a file.

This script returns a JSON array of pods in the namespace, similar to this:

This example uses Kubernetes. Harness already has full, first-class support for Kubernetes deployments. We just use this script as an example.

For the main Kubernetes support, go to Kubernetes deployment tutorial.

Next, you need to provide the JSON path to the JSON array object for the target hosts.

Now that you have provided a path to the instances array, you can map any useful JSON keys in Instance Attributes.

Important The instancename value in the Field Name setting is mandatory. 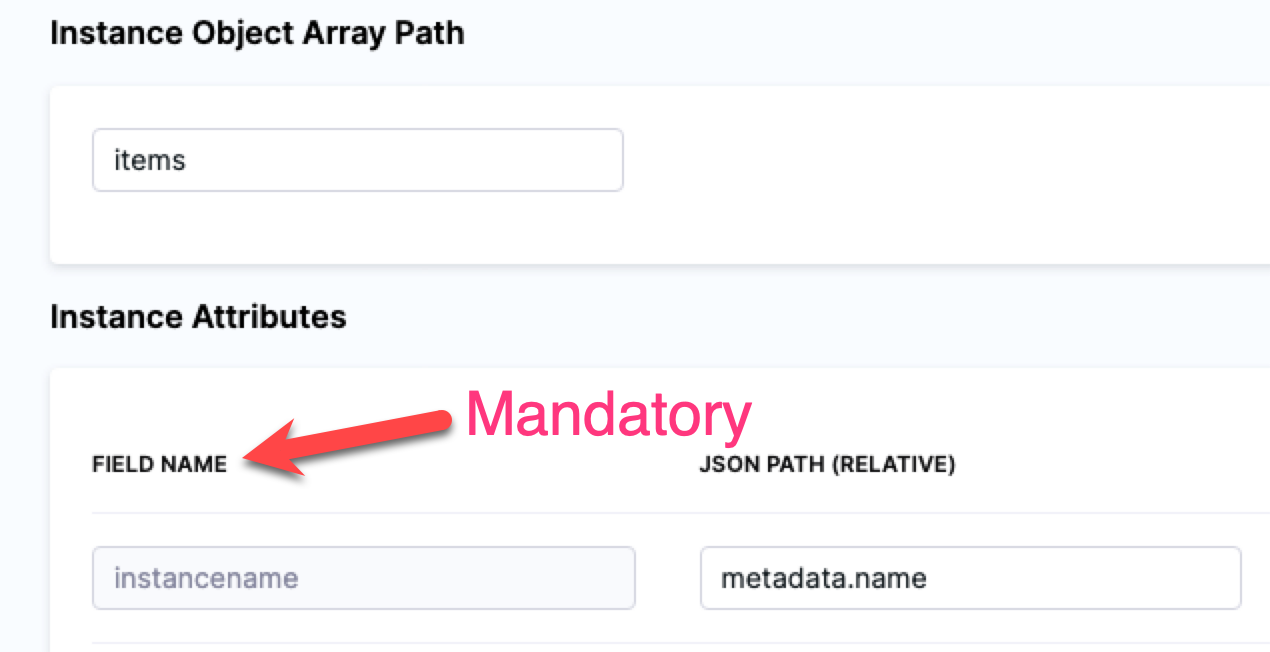 You must use instancename to identify the target host(s) in the JSON array.

For our Kubernetes example, we will use:

You can map any additional attributes containing information you want to reference in your Execution, most likely in a Shell Script step. See Referencing fetched instances using expressions.

Now we'll create a Harness Pipeline that will use the Deployment Template.

The stage is created and you are on the Service tab.

Next we'll define the Harness Service using the Deployment Template you created and a Docker artifact for deployment.

If you are new to Harness, learn about the basics in CD overview and key concepts and CD Pipeline modeling overview.

Next, we'll add the artifact for deployment to the Harness Service.

Add the Docker image to deploy​

Referencing the artifact in your files​

Later, in the stage Execution, we will add a deployment step that will download and apply a Kubernetes manifest. The manifest is located in a public GitHub repo.

You must use <+artifact.image> somewhere in your stage Execution to reference the artifact you added to Harness. You can reference it in a Shell Script step, a spec or manifest, or any other relevant step or setting.

If you do not use <+artifact.image>, Harness will not attempt to download and deploy the artifact.

For non-containerized artifacts, use <+artifact.path>.

You can create Environments and their Infrastructure Definitions inside a stage or in the Environments section of your Project. In this tutorial, we'll create everything inside the stage. 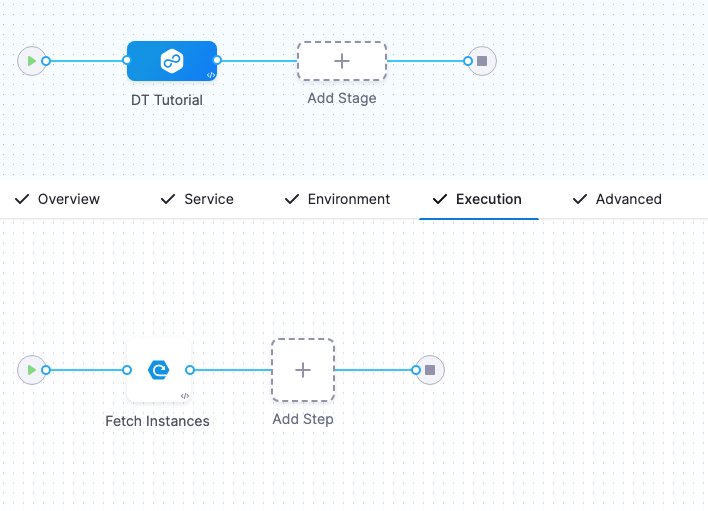 When the pipeline runs, that step will run your Deployment Template's script and traverse the JSON instances array returned to identify the target instances for deployment.

Execution has Fetch Instances but it still needs a step for deployment.

Let's add one more step to describe the deployment and see how it worked on each fetched instance. 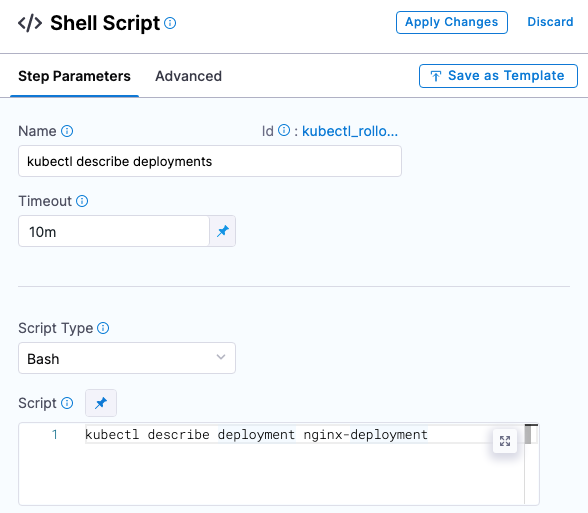 Next, we need this script to loop through all the fetched instances. We do that by using a Looping Strategy in the step's Advanced section.

Select the Delegate for the stage​

You don't have to use the same Delegate for the entire stage. If multiple Delegates are used, Harness will ensure that they can perform the deployment.

For this tutorial, we'll use a single Delegate because we are deploying to its cluster. 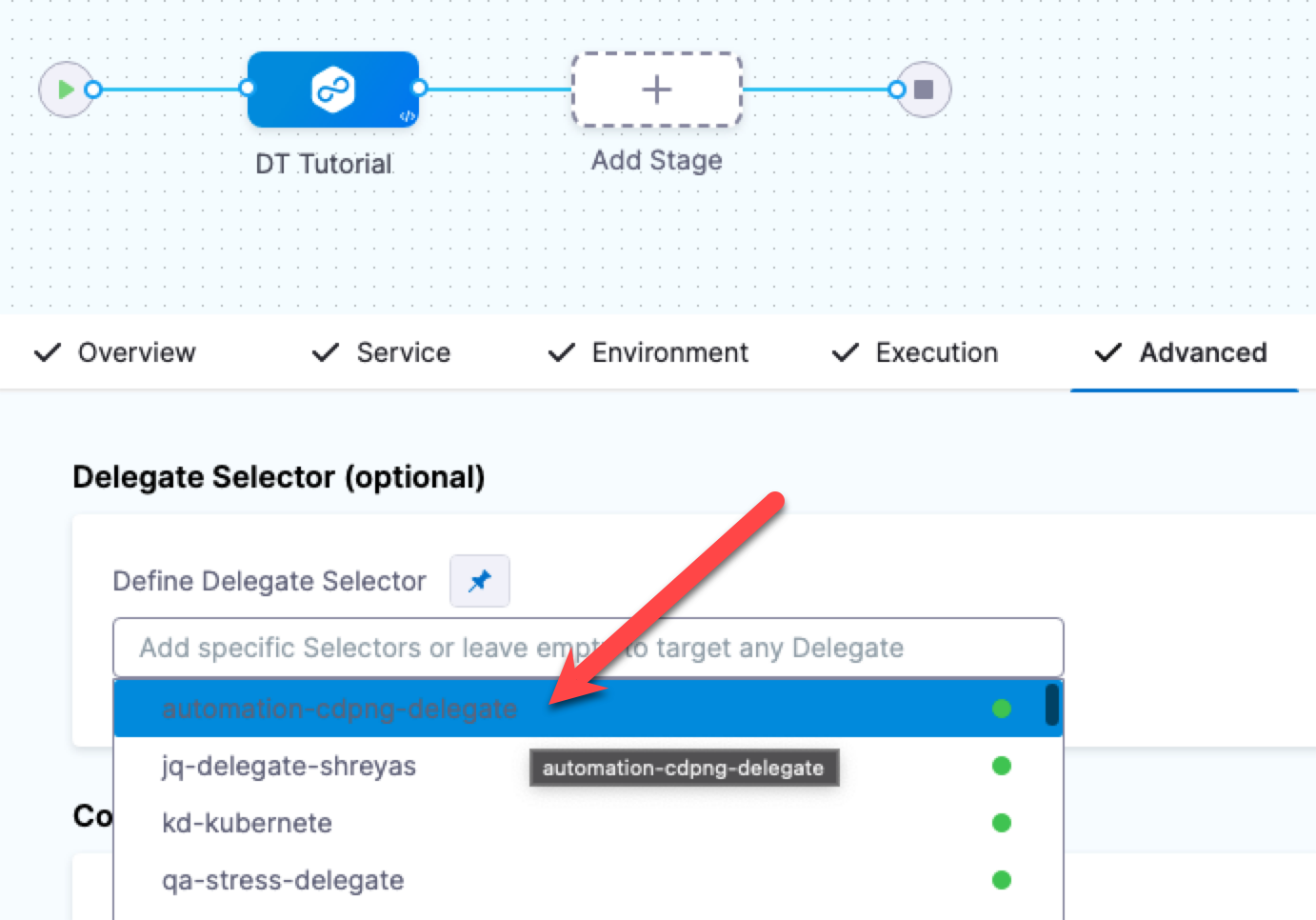 Run and verify the pipeline​

The Pipeline runs and you can see the Kubernetes Deployment object created and the target instances fetched.

Click the Fetch Instances step, and then click Output to see the instances output from your script: 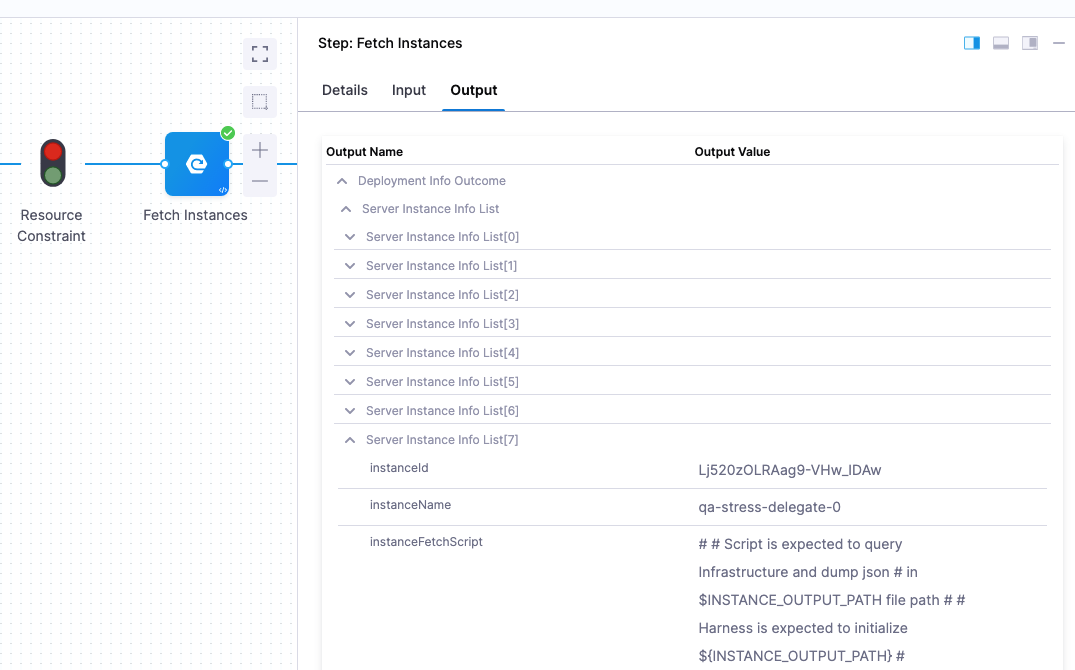 Lastly, look at the kubectl describe deployments step to see the deployment on each pod: 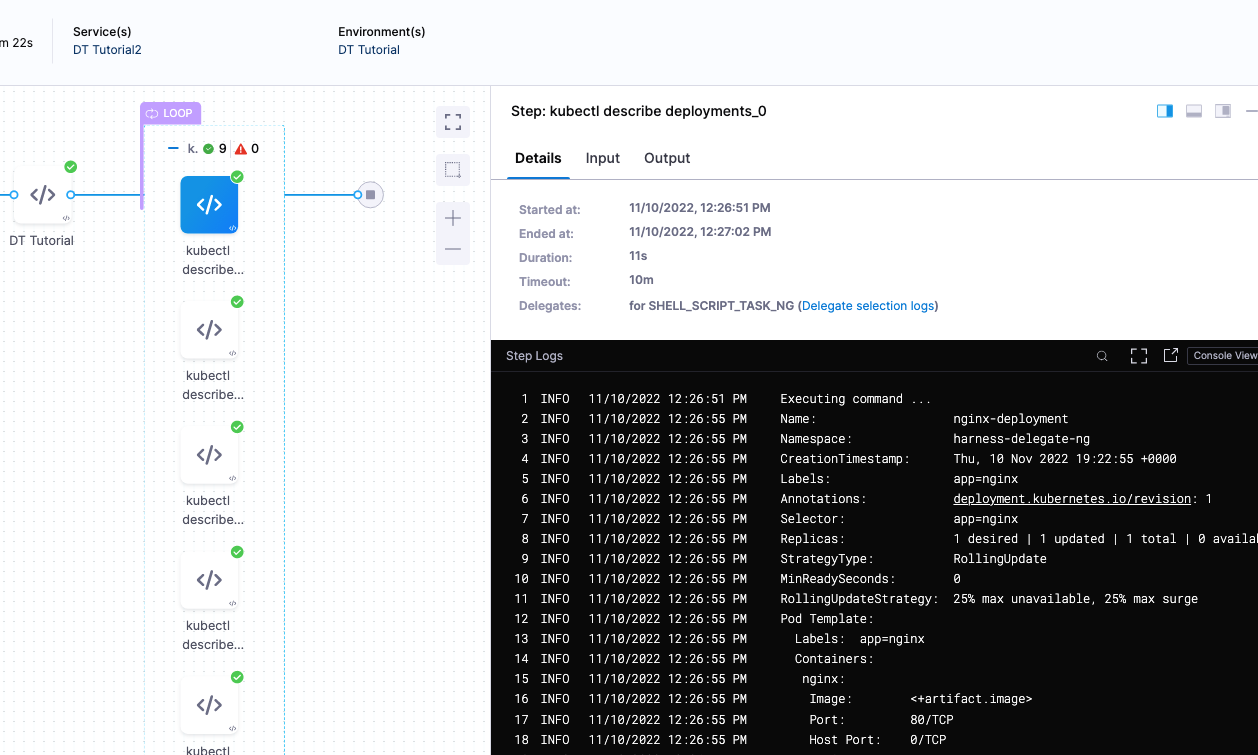 You successfully deployed an artifact to a Kubernetes cluster using a Harness Deployment Template.

In this tutorial, you learned how to:

See the following sections for information on other settings.

You can create the following types of variables. 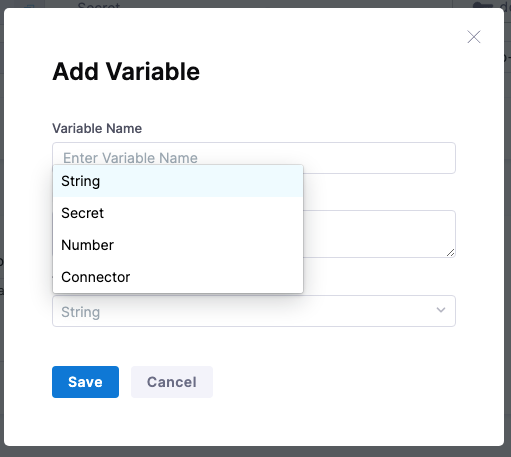 These are variables that you can use in the following places:

You reference variables using a Harness expression with the syntax <+infra.variables.[variable Id]>. You can reference any setting in the variable entity, such as a Connector's URL.

Here are some examples.

Here's the expressions referencing these variables:

When you define the Infrastructure Definition in your stage Environment, you can override any variable values.

You can use <+instance...> expressions to reference host(s) properties.

The <+instance...> expressions refer to the Instance Attributes in the Deployment Template:

The following expressions refer to instance(s) collected by the mandatory instancename field:

The expression <+instance.host.properties.[property name]> can used to reference the other properties you added to Instance Attributes.

For example, in the example above you can see the artifact field name mapped to the artifactBuildNo property.

To reference artifact you would use <+instance.host.properties.artifact>.

instance.name has the same value as instance.hostName. Both are available for backward compatibility.

To use these expressions, you need to enable the Repeat Looping Strategy and use the expression <+stage.output.hosts> on the step that follows Fetch Instances.

For example, here is a Shell Script step that outputs these expressions: 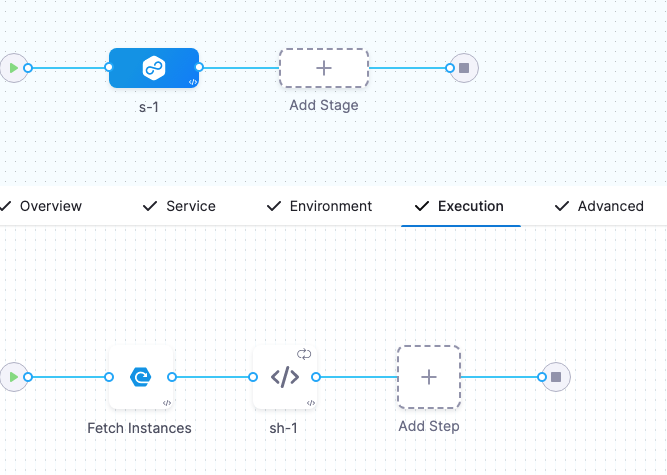 Now when this step runs, it will run on every host returned by Fetch Instances.

Where to put Fetch Instances and deployment steps​

The stage Execution must include the Fetch Instances step and a step to deploy the artifact to the instances fetched.

Typically, the deployment steps come after the Fetch Instances step because you are fetching existing instances.

Since a Deployment Template can be used on any host type, the Command step can only be run on the Delegate. You must use the Run on Delegate option in the step.

Consequently, there is no reason to use a Looping Strategy when using the Command step with Deployment Templates.

For more information, go to Use the Command step to download, copy, or run scripts.

In some cases, you might have a JSON payload without a high-level object. In these cases, you can use $ in Host Object Array Path.

Let's look at an example:

In this example, the Host Object Array Path is $ and the instancename field would use  instance.vmIp.

You can reference each instance fetched by the Fetched Instances step using the step's Output tab. 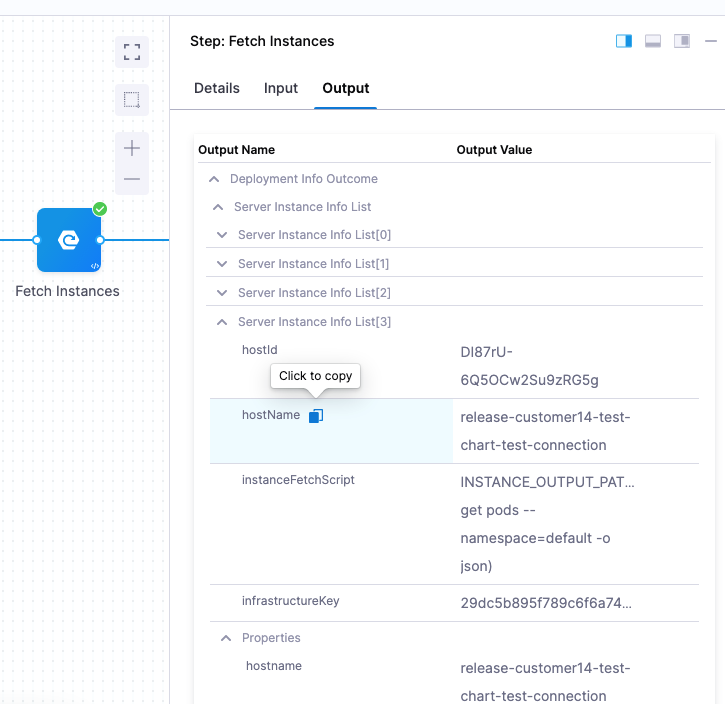 You can expand each instances and copy the expression for the instance metadata you need.

For example, the expression for the instancename of the 4th instance fetched here is (the stage name is DT_Tutorial):

To reference the entire instance list, you can use this expression: