This tutorial shows you how to build a simple, two-stage CI Pipeline in Harness. Setting up and running the Pipeline will take about 30 minutes.

The Pipeline will build and run a unit test on a codebase, upload the artifact to Docker Hub, and then run integration tests.

You will use publicly-available code, images, and your Github and Docker Hub accounts.

You'll learn how to create a CI Pipeline that does the following:

Make sure you have the following set up before you begin this tutorial:

Google Kubernetes Engine (GKE) Autopilot is not supported at this time.

Here's an architecture diagram of the very simple setup we use for Harness CI: 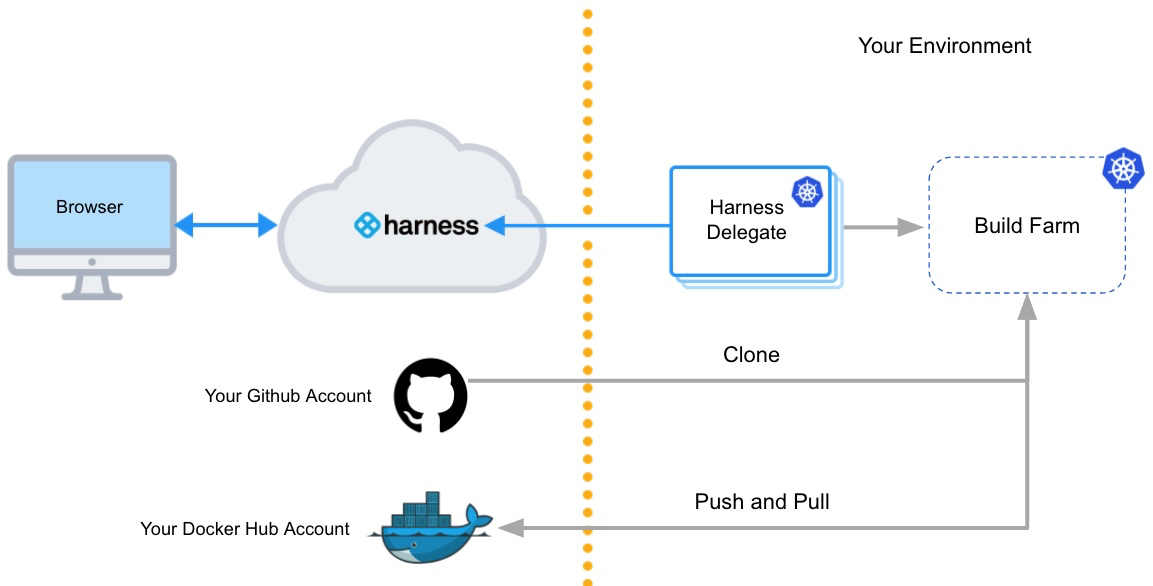 You will install the Harness Delegate in the same cluster you use for the build farm. The Delegate will create the namespace harness-delegate. You'll use that namespace for both the Delegate and build farm. You can change it if you like.

Here's a quick video that provides an overview of Harness CI:

Option: Use Your Own Code Repo​

For this tutorial, we use a codebase located at:

All steps in this tutorial work with any git repo, so you can use your own code repo instead.

Pipelines are a collection of one or more stages. They manage and automate builds, testing, deployments, and other important build and release stages.

Step 2: Set Up the Build Stage​

The "work horse" of most CI Pipelines is the Build Stage. This is where you specify the end-to-end workflow for your build: the codebase to build, the infrastructure to build it, where to post the finished artifact, and any additional tasks (such as automated tests or validations) you want the build to run.

To run a build, a Build Stage needs to connect to the codebase, the build infrastructure, and the artifact repository. A Connector is a configurable object that connects to an external resource automatically.

Create a Connector to your Codebase​

You'll now create a new Connector to the GitHub codebase. Set up the Connector as follows.

You can create Connectors for GitHub accounts or specific repos. If you use an account Connector, you specify the repo when you run the build. In this case, we'll connect to a specific repo.

Now you need to specify the username and Personal Access Token for the Connector to use. Harness secrets are safe. They're stored in the Harness Secret Manager. You can also use your own Secret Manager with Harness.

You can choose to establish connections directly from your Harness platform or through a Delegate service running within your corporate firewall.

The Harness Delegate is a local service that connects your infrastructure, collaboration, verification, and other providers with your Harness platform. For this tutorial, you'll install a Delegate in your Kubernetes cluster.

You should now be in the Delegates Setup screen of the GitHub Connector wizard. Click Install new Delegate.

You can install the Delegate in different locations. Usually it makes sense to install and run the Delegate on a pod in your Kubernetes build infrastructure. You'll do this in the next steps.

Now you specify the Delegate name, size and permissions. You can use a small delegate for this tutorial and leave the other options at their defaults.

Harness now generates and displays a workspace-definition YAML file that you can install in your build infrastructure.

You should see output similar to this:

Connect to the Delegate​ 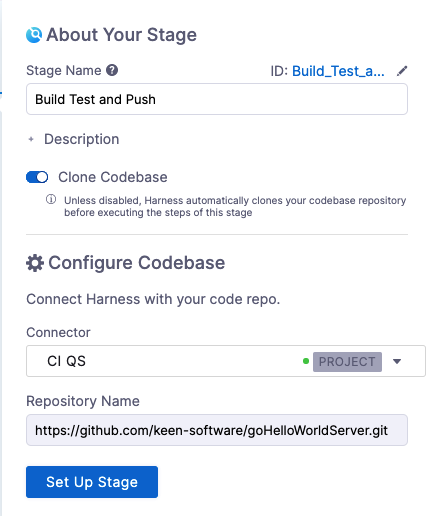 Now that the build farm infrastructure is set up, you can run unit tests against your code.

Next, we'll add a Run step to the stage that will build the code and run a unit test.

The Run step executes one or more commands on a container image. Configure the step as follows.

You will now create a new Connector to your DockerHub account as follows.

This Run step will intentionally fail the test. This will be useful to see how a test failure is recorded in Harness.

Now you have a Stage to clone, build, containerize, and then push your image to Docker Hub. In this step you'll add a Stage to pull that image, run it in a container, and run integration tests on it. 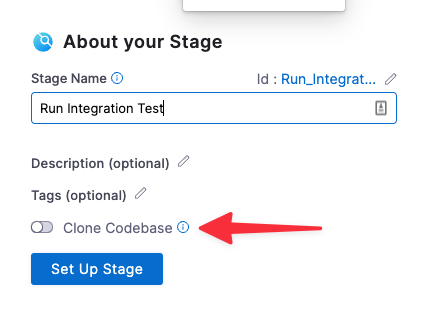 Here you configure the stage to use the same infrastructure as the previous stage.

Add Built Image from Stage 1 as a Service Dependency​

In the Build Test and Push stage, you built your code and pushed your built image to Docker Hub. Now, in Run Integration Test, you will identify the image as a Service Dependency for your test stage. Harness will pull the image onto the container in your infrastructure. Next, it will start the Hello World Server in the image.

Notice that the Image field uses the same variable <+pipeline.sequenceId> for the Image that you used in the previous stage. This tells Harness to pull the image with the same tag as the image pushed previously. Here's an example:

Next, we can run an integration test. We'll simply test the connection to the server.

The Build Pipeline is complete. You can now run it.

Click each stage's steps to see the logs in real time. 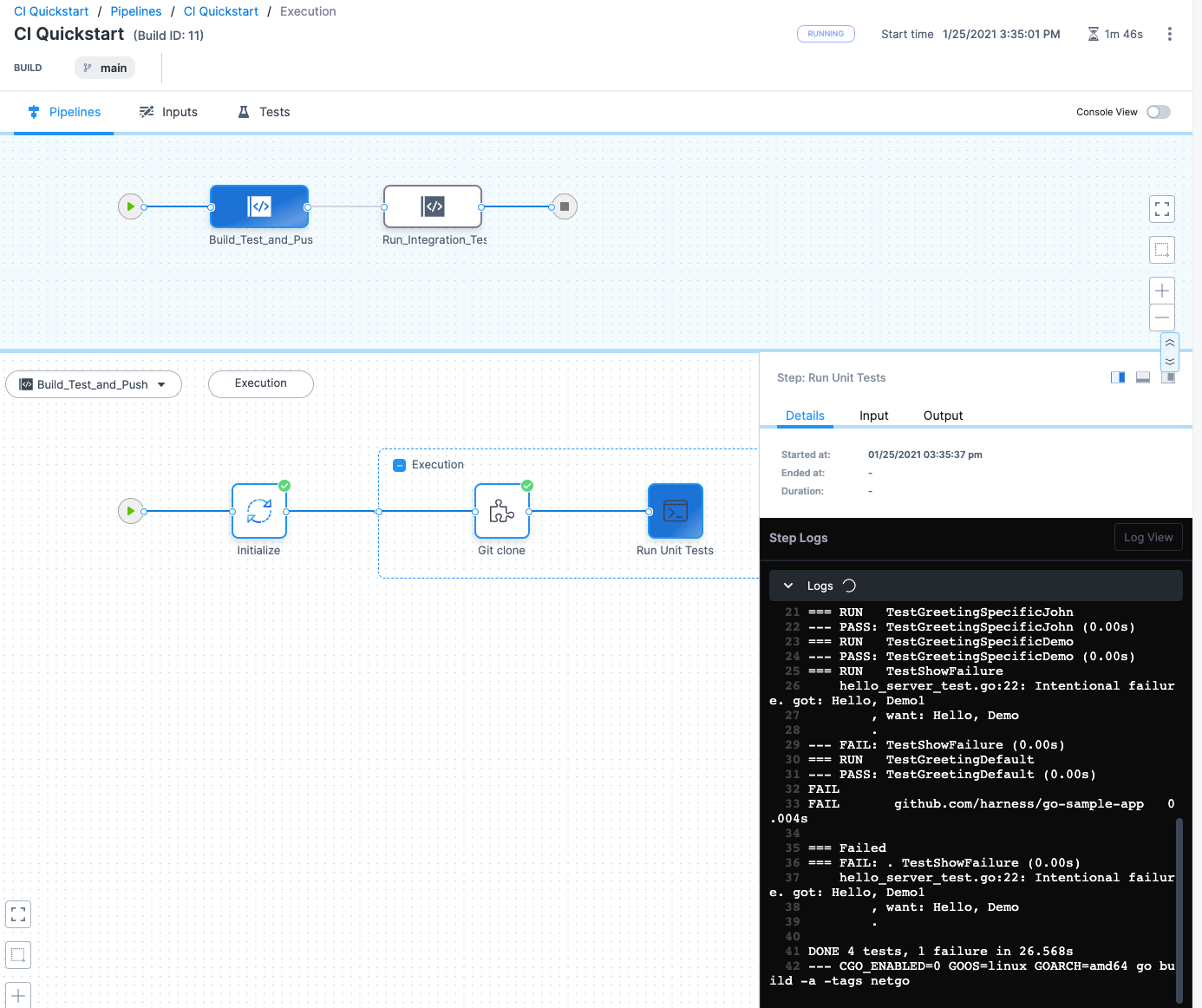 You can see the build number in the Build and push image to Docker Hub step used as an image tag. For example, 11:

In the Initialize step of the Run Integration Test stage, you can see the image with the same tag pulled from your Docker Hub repo:

Now look in your Docker Hub repo. You can see the image and tag:

Click Tests. You can see the failed test from stage 1.

Congratulations! You have a CI Pipeline that builds and tests your code.

The entire Pipeline is available as YAML, also.

You can see the entire Pipeline as YAML. You can edit anything in the Pipeline and run it again.