There is a known issue with this feature. When you turn on a Feature Flag, some Target rules may be reordered in your Git repo. This doesn't affect the functionality of your Feature Flag or Targets and we are working to fix this issue as soon as possible.

In the unlikely circumstance that Harness and Git are connected but out of sync, your Git file is the source of truth. Changes in the Harness Platform don’t take effect until you commit them to Git.

You must set up Git Experience in your Project before you can use it with Feature Flags.To do this:

When you set up Git Experience and enable it in your Feature Flag Project, Harness automatically creates a flags.yaml file in the .harness folder you created during the set up. All your Flag, Environment, and Target information is stored in this file.

For example, the following sample shows:

The synchronization between the Harness Platform and the flags.yaml file works in both directions:

In the unlikely circumstance that Harness and Git are connected but out of sync, your Git file is the source of truth. Changes in the Harness Platform don’t take effect until you commit them to Git.

If you don’t see the changes you made in Git reflected on the Harness Platform, refresh the page.

Turn syncing with Git on or off​

The Git Experience icons are displayed on many pages, you can turn it on or off from any page where it is displayed.

After you have enabled Git Experience and understand how it works with Harness Feature Flags, you can turn the synchronization between the Harness Platform and Git on or off by completing the following:

Figure 1: Sync with Git turned on, auto-commit turned off

This turns on syncing with Git. When you toggle only this button, each time you make a change on the Harness Platform, you will be prompted to confirm which branch you want to commit to in Git and to add a commit message. For example: 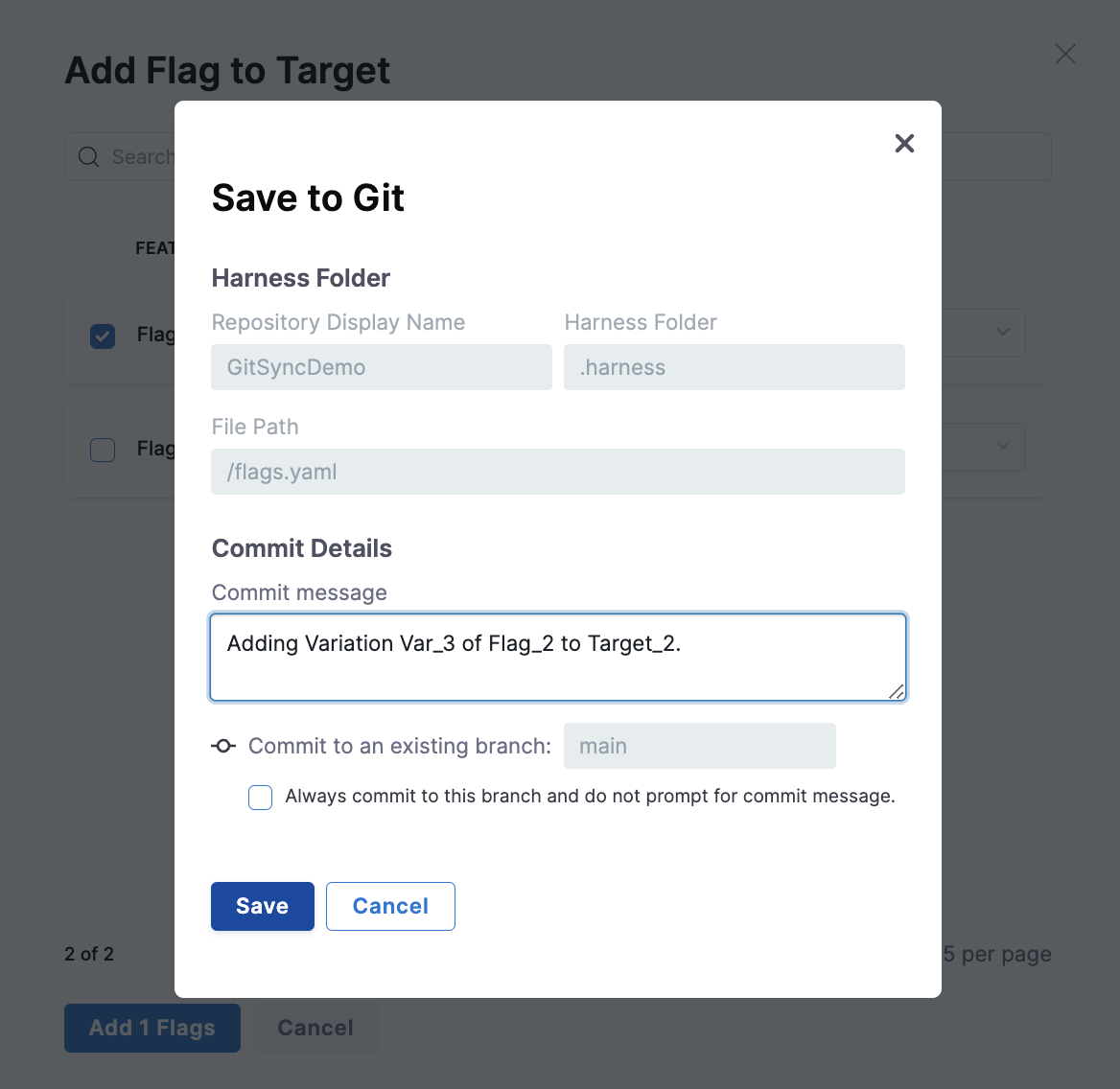 If you select the checkbox Always commit to this branch and do not prompt for a commit message, the Auto-commit to the selected branch option will be toggled on.

When you are using this option, the branch icon is a gray circle:

Figure 3: The branch icon when syncing with Git is enabled but auto-commit is disabled

Auto-commit to the selected branch​

This turns on Auto committing, which means you do not have to manually enter a commit message and confirm the branch you want to commit to. Any changes you make will automatically be synced to the flags.yaml file on Git. Changes that are auto-committed have a [AUTO-COMMIT] prefix, for example:

Figure 5: An auto-commit message in GitHub

When you are using the auto-commit option, the branch icon is a blue circle:

Turn off syncing with Git​

To turn off syncing with Git, turn off the Sync with Git toggle.

Figure 7: Sync with Git turned off

If you turn the toggle on again, your Flags will sync with Git again right away.

The Auto-commit to the selected branch toggle will be the same status as before you turned off synching with Git.

When syncing is off, the branch icon is a red warning circle:

Figure 8: A screenshot of the Git Sync icon when Git Sync is toggled off.