This topic shows you how to create a Harness Application template you can sync and clone in Git for onboarding new teams.

Often, teams create an Application template for engineering leads or DevOps engineers. Each team then gets a clone of the Application in Git that they can modify for their purposes.

Development teams can then deploy consistently without using the Harness UI to create their Applications from scratch. They simply change a few lines of YAML vis scripts and deploy their application.

Here are a few examples of why Harness customers use Git for onboarding:

For example, here is a new GitHub repo named Golden Template Application and its corresponding set up in Harness as a Source Repo Provider: 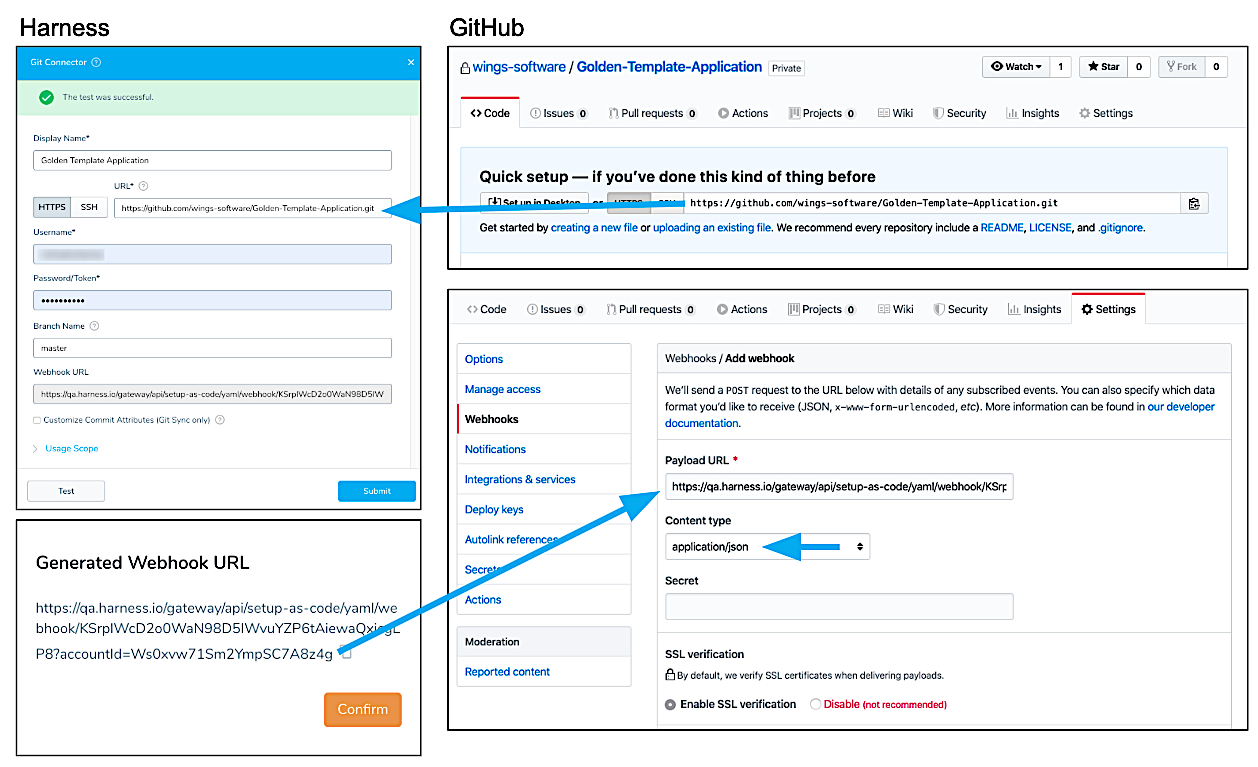 For details, see Configuration as Code.

First, you will create the Application template in Harness. You will sync it with the Golden Template Application repo and enable all of its template settings.

Create an Application named Golden Template Application. When you create it, select Set up Git Sync, and select the Source Repo Provider in Git Connector: 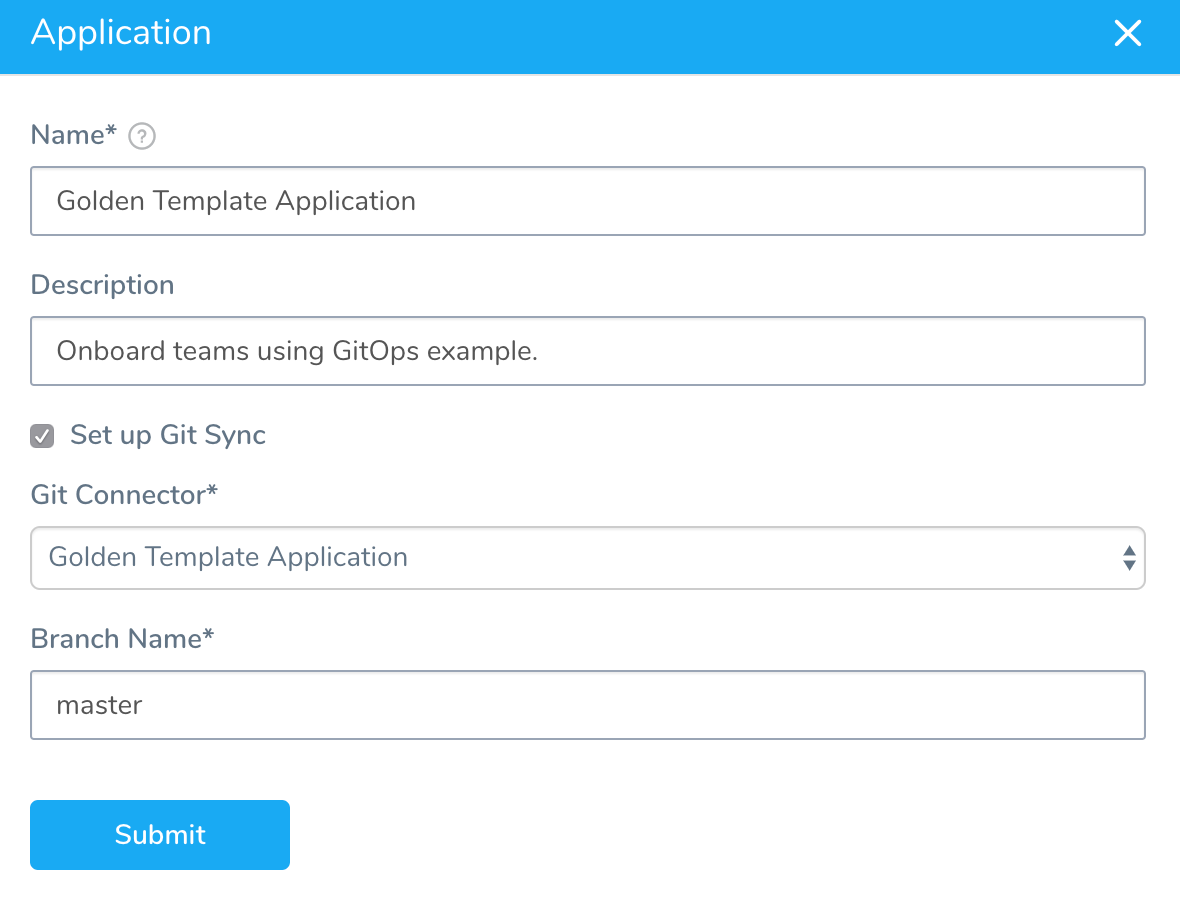 Once you click Submit you will see the Application in your repo:

The repo will be updated with Application components as you create them in Harness.

Next, create a Harness Service in the Application. For this example, we'll create a Kubernetes Service named SampleK8s. For details, see Kubernetes Quickstart.

The Service is set up with the following:

Once you create the Service it is synced with your repo automatically:

The default manifests are also synced with your repo.

First, set up an Artifact Source placeholder in the Service. Here we use a publicly-available Nginx Docker image from Docker Hub: 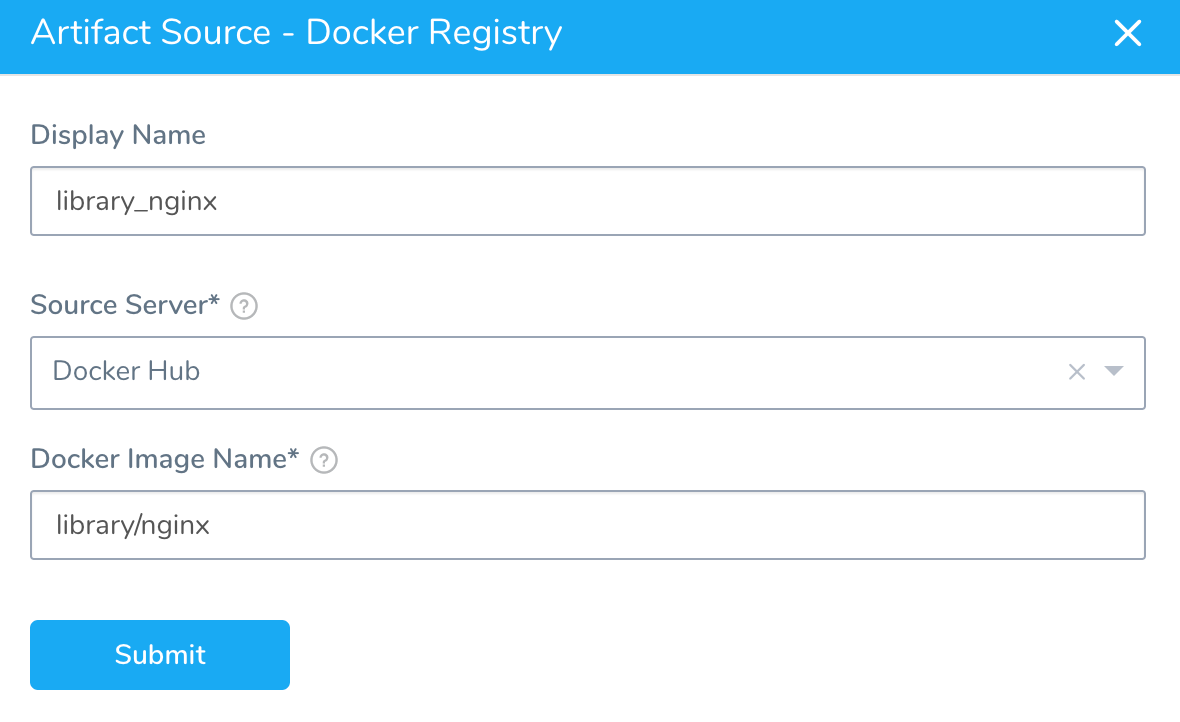 Next, we'll configure the SampleK8s Manifests section to use remote manifests.

If you use remote manifest, you typically need to add another Source Repro Provider for the repo where they are stored. Here is how it is mapped in our example:

Once you have set up the remote manifests, the default manifest files that were synched when you created the Service will be ignored. You can delete them if you like.

The value of the namespace Service variable is ${env.name}. The ${env.name} expression references the name of the Environment used by the Workflow that deploys this Service. This is a useful default value because Environments are often named after the namespaces teams use, such as dev and prod.

The Service template is complete. Next, we'll create the Environment and Infrastructure Definition templates.

We'll add two Environments: one Environment for prod and one for dev.

Note how the ${serviceVariable.namespace} we created is used in the Namespace setting.

Note how the ${serviceVariable.namespace} we created is used in the Namespace setting.

When the Environments and Infrastructure Definitions are created they are synced with Git automatically:

If you want to overwrite the namespace value used in the Namespace setting for the prod or dev Infrastructure Definitions, you can use a Service Configuration Override in the Environment. 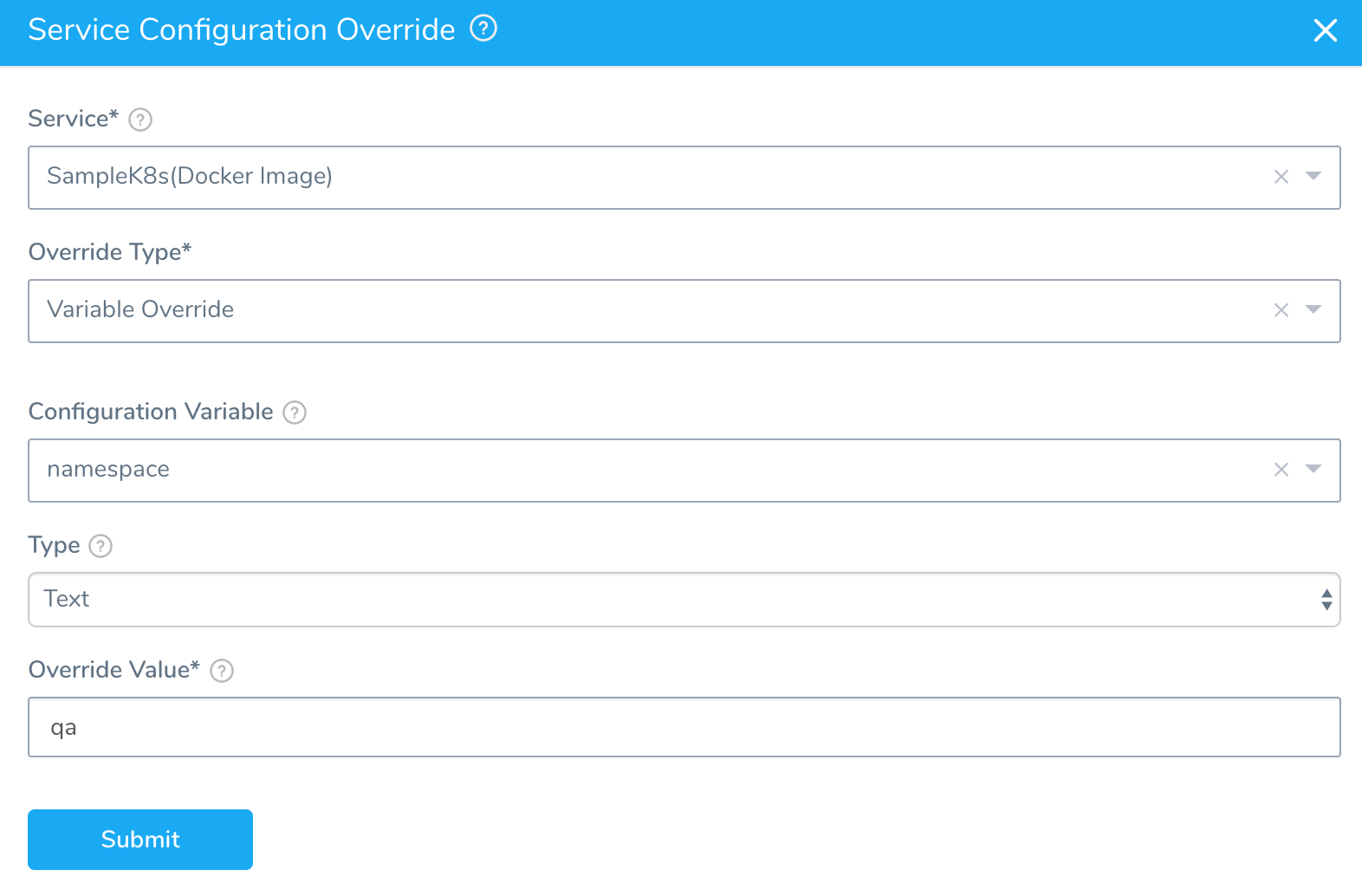 For this example, we create a Kubernetes Rolling Deployment template. Create the Workflow type(s) you expect your teams will need. You can always remove unneeded Workflows from Git later.

All of the major settings of Harness Workflows can be templated, but first you need to set up the Workflow with actual values.

Create the Workflow by selecting the Environment, Service, and Infrastructure Definition you created earlier.

Next, open the settings again and click the [T] button for all of the settings. This will replace the settings with Workflow variables, thereby templating the Workflow. 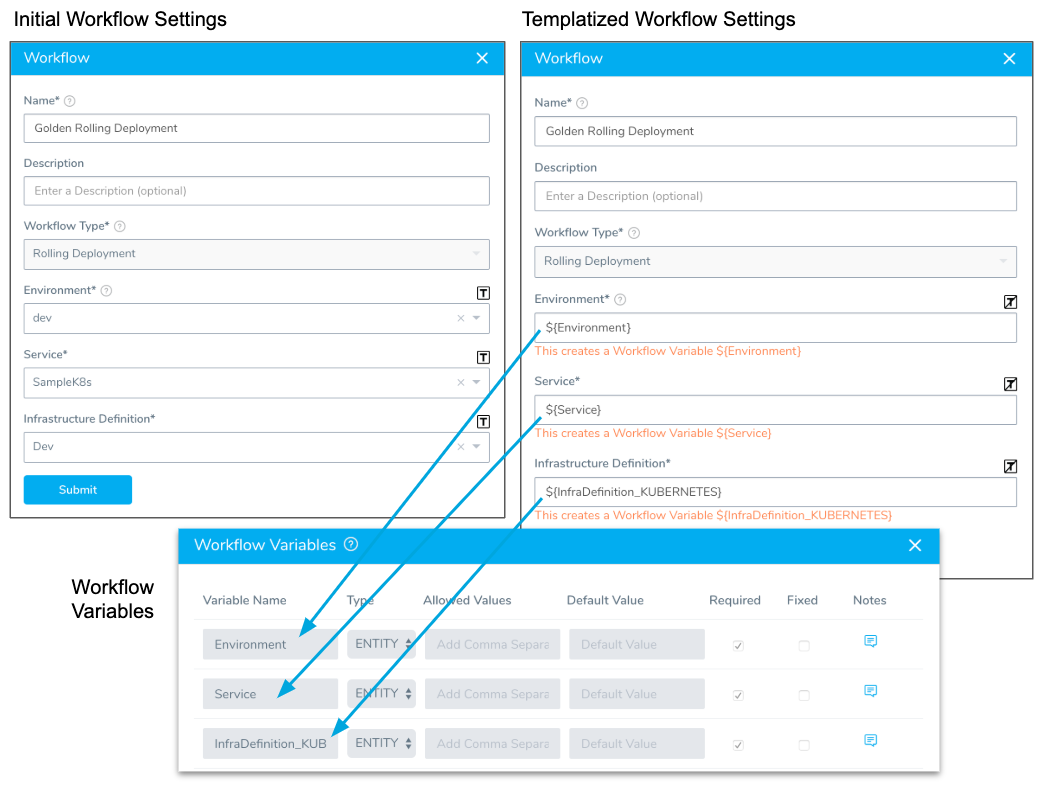 Now that the Workflow is templated, you will see the Workflow variables in the repo Workflow YAML and the templatized: true key. 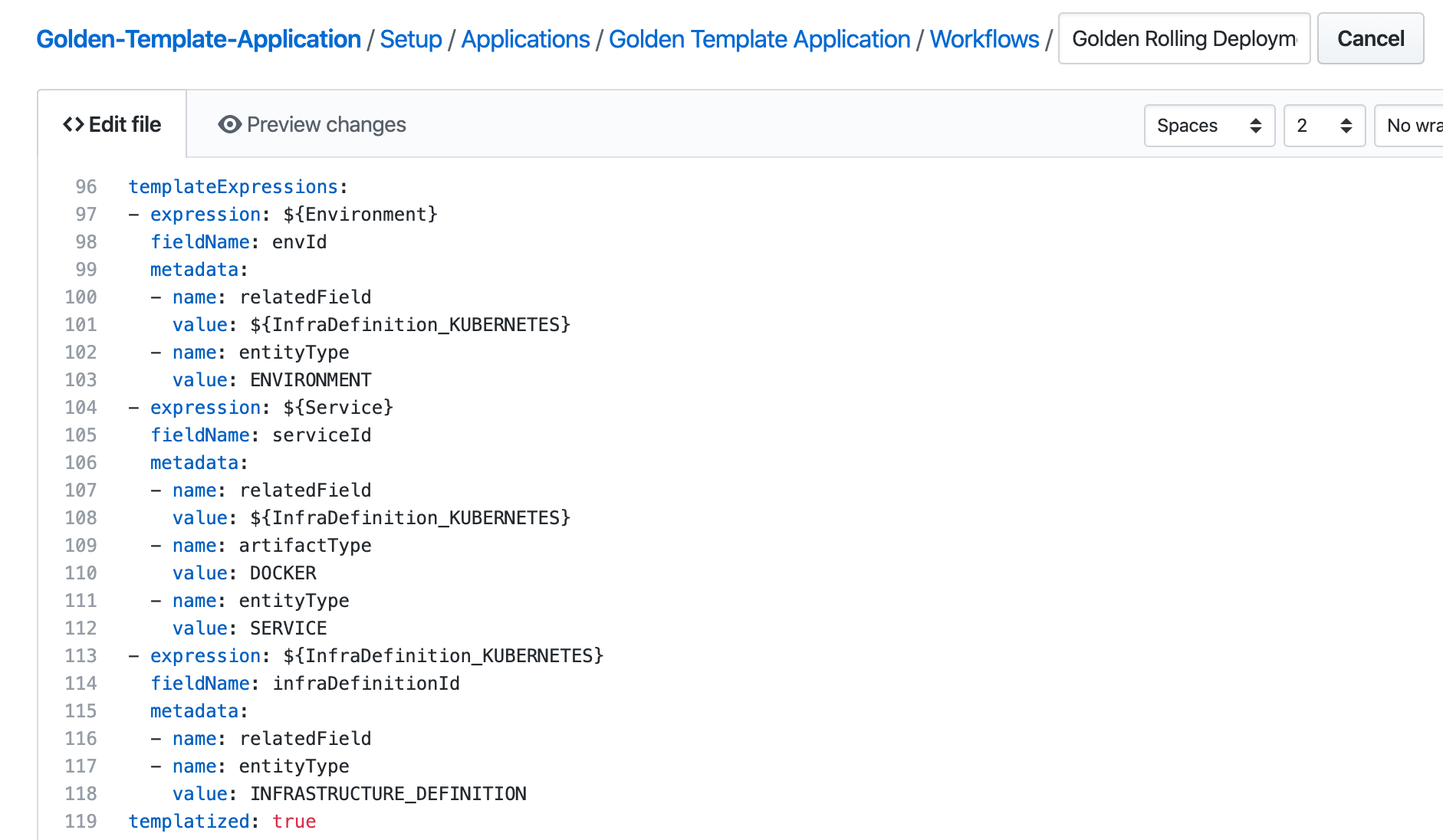 Now the templated Workflow can be used by any Service, Environment, and Infrastructure Definition.

Next, we'll create a Pipeline for the deployment.

For this example, we create a three Stage Pipeline:

This Pipeline is a common use case and can be augmented as needed. For more details on Pipelines, see Pipelines. 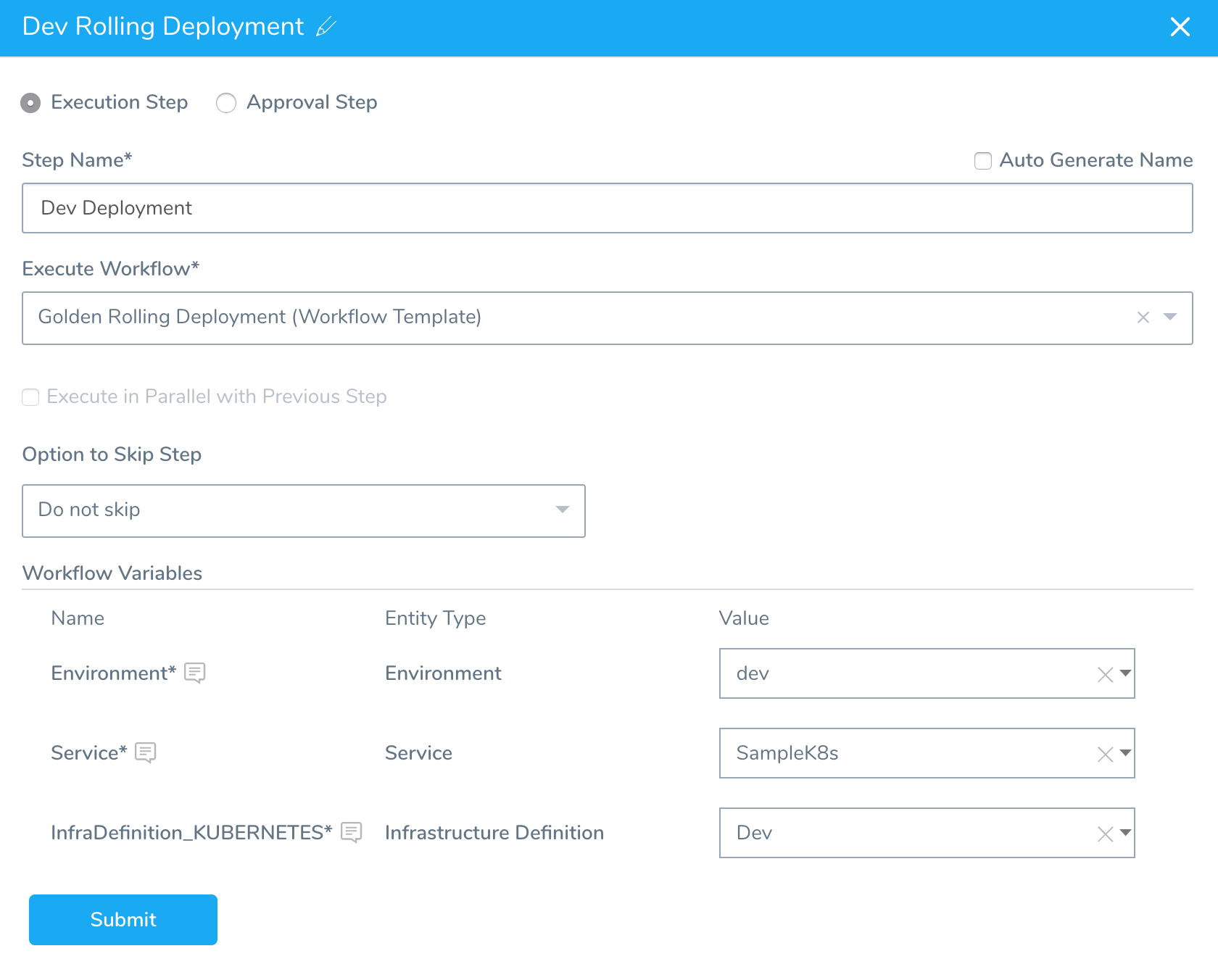 Next, create the Approval step for Stage 2: 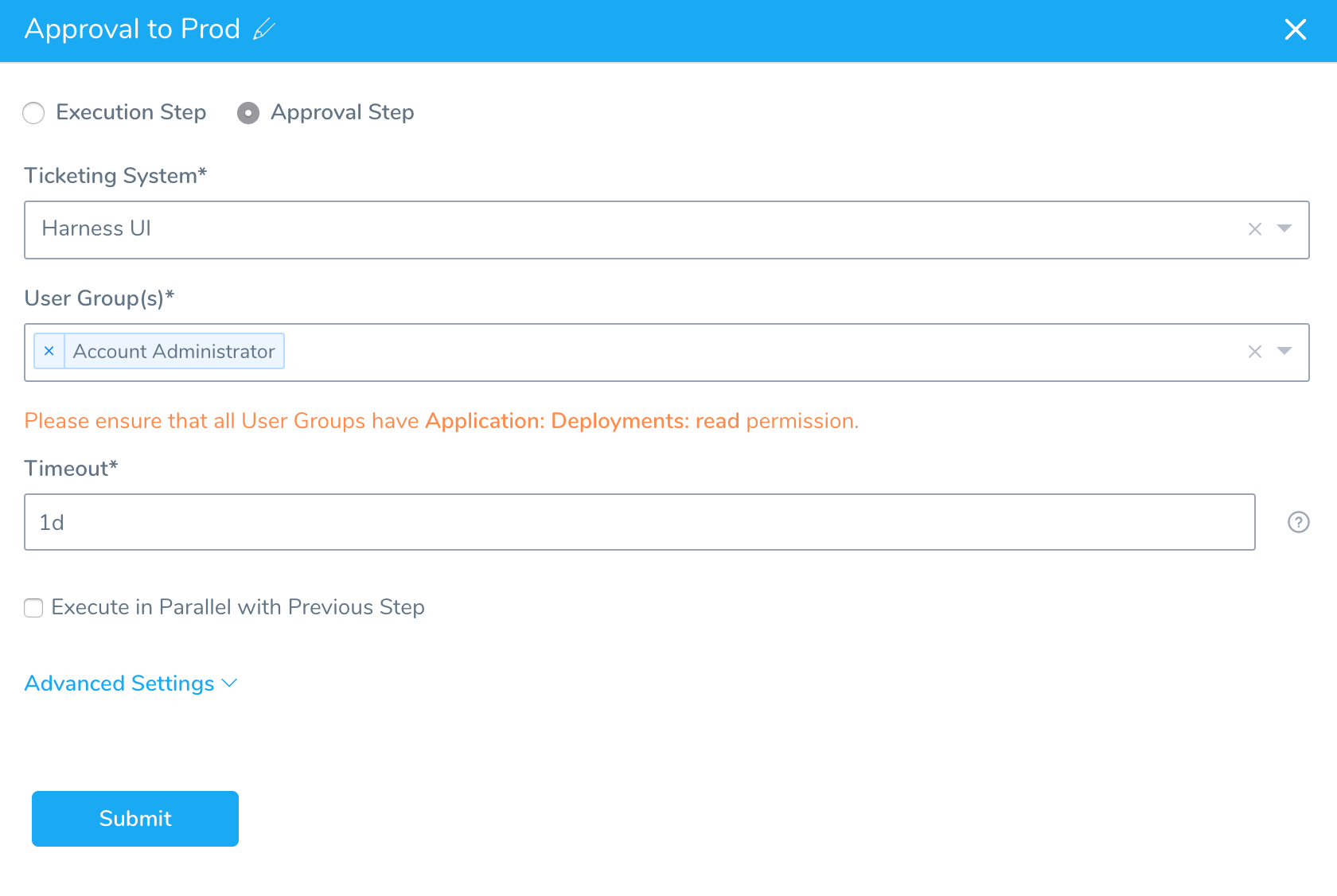 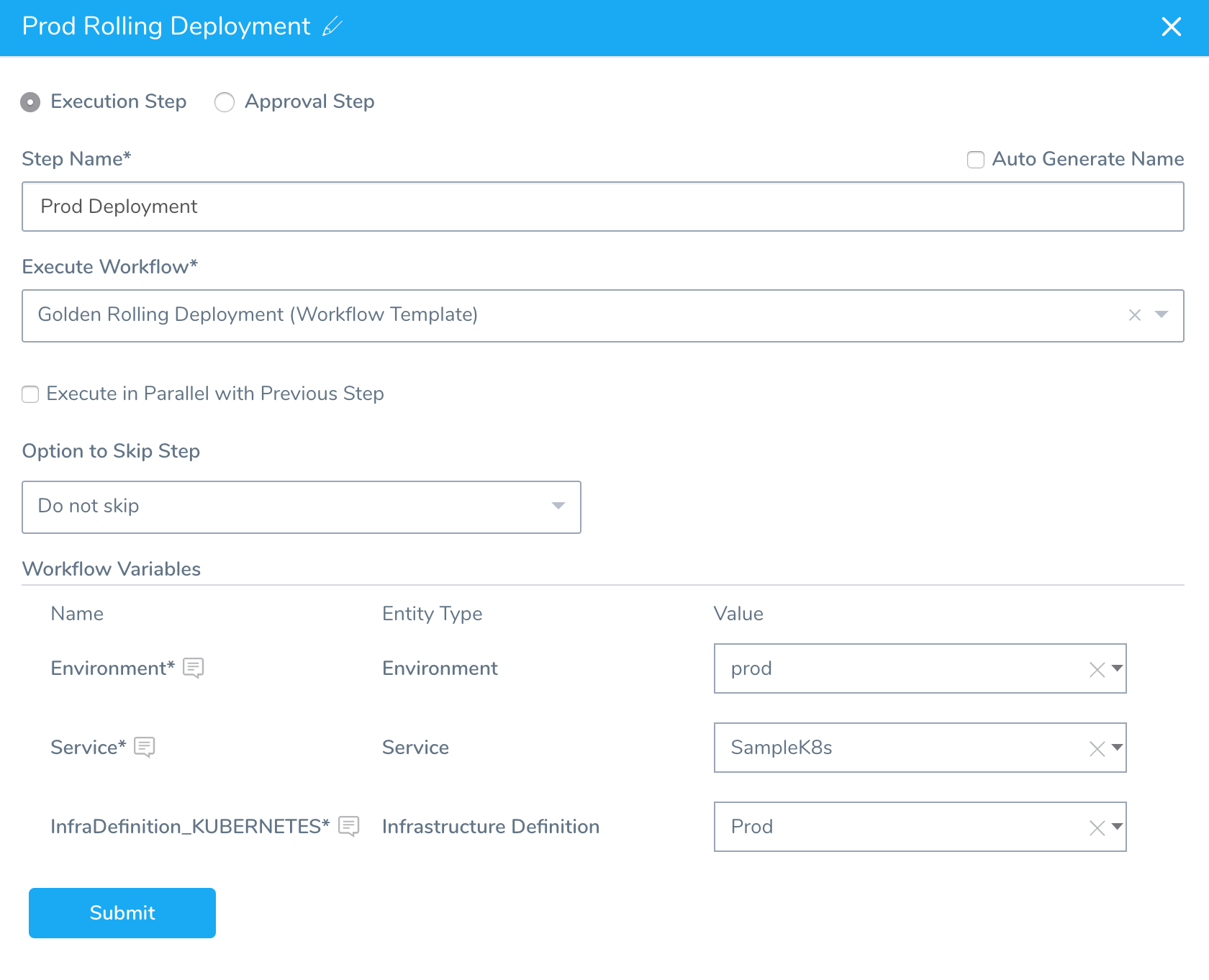 When you are done, the Pipeline will look like this:

The Pipeline is synched with Git: 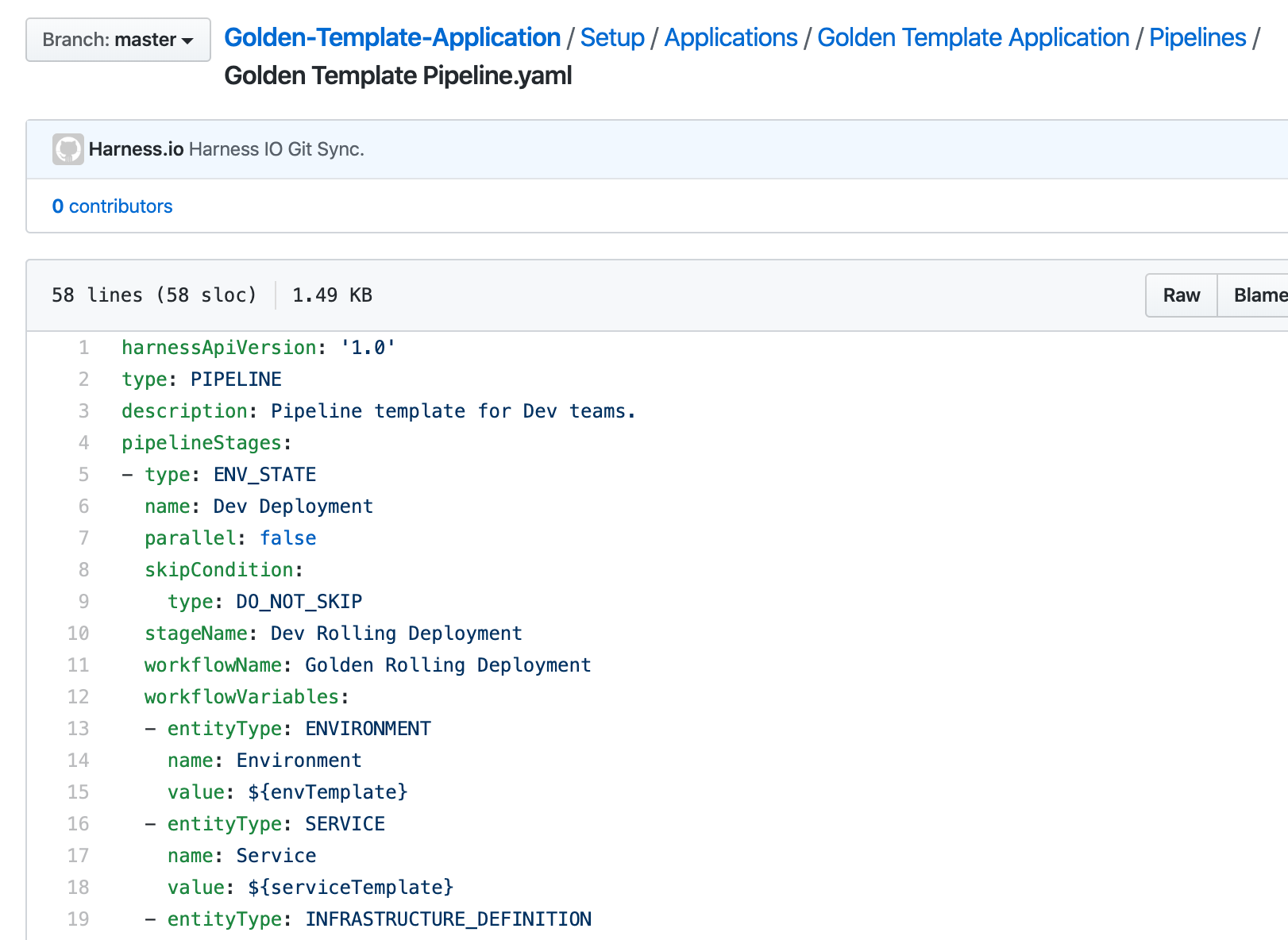 The Golden Template Application is complete. Now your teams can clone and modify it as needed.

Step 3: Clone and Change the Application​ 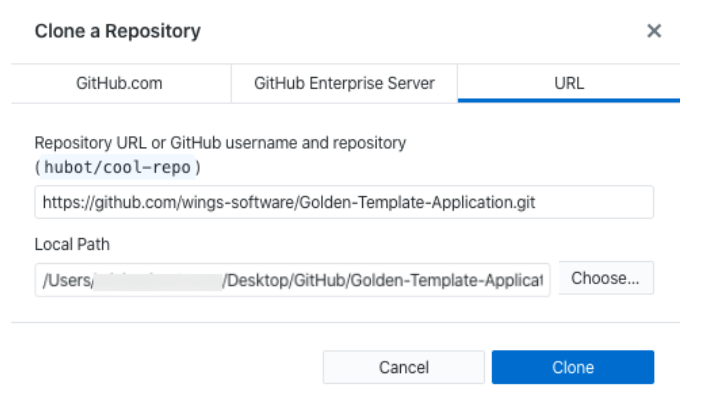 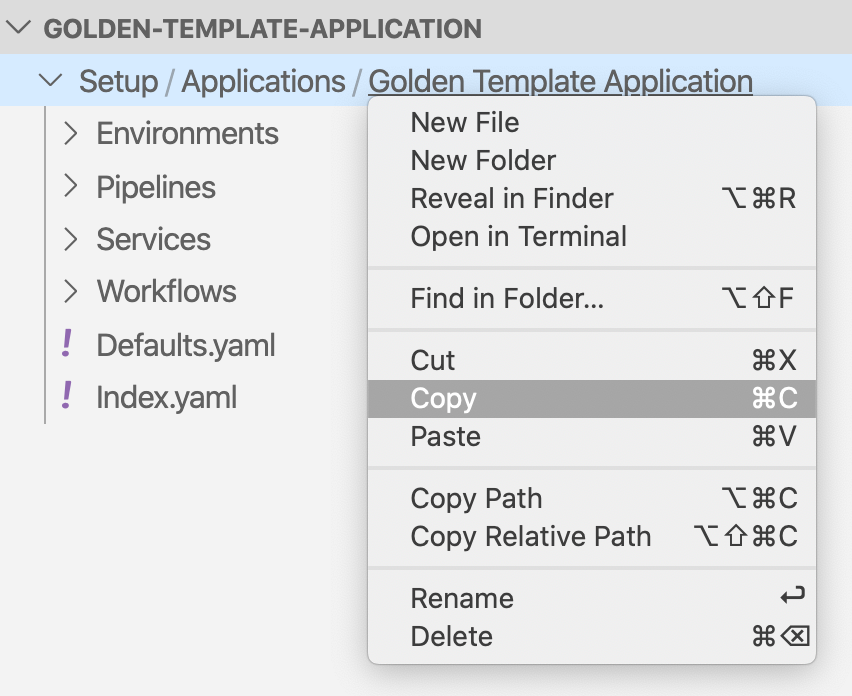 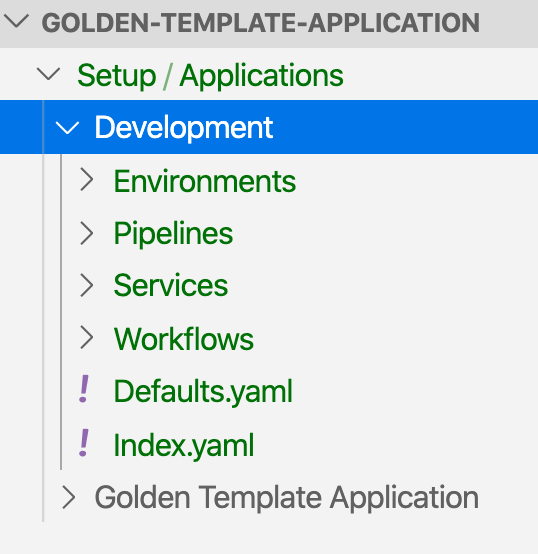 Change the new Application description in its index.yaml file: 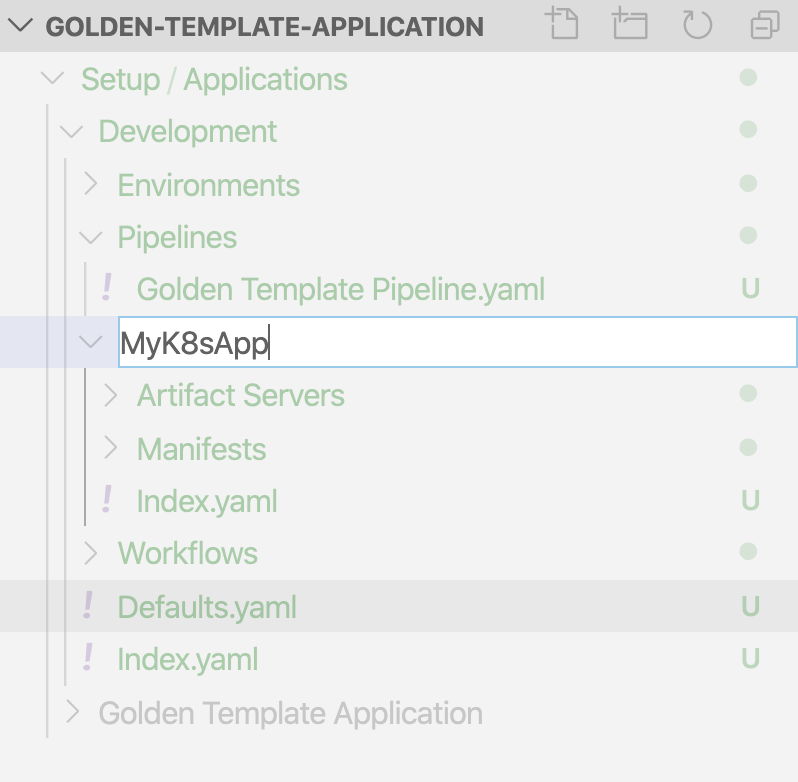 Update the Pipeline with the new Service name.

Update the following Service settings to customize this Application for a new team:

When you are done making changes to the new Application, you can commit and push the changes. 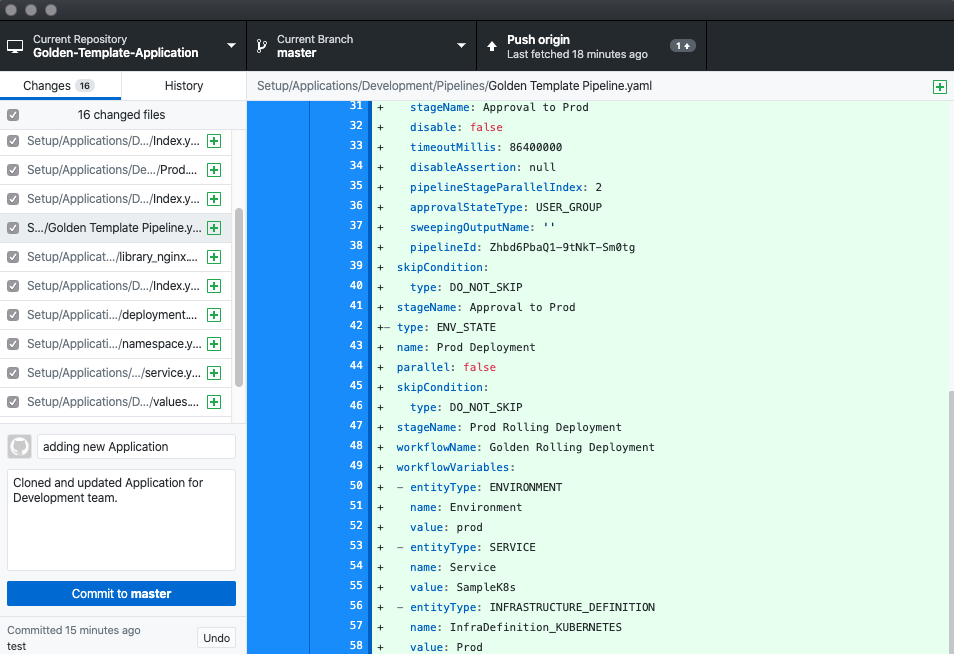 The new Application is in Git:

And the new Application is automatically synced and added to Harness:

Something not working? If some Application component does not appear in Harness it is likely because of a conflict between the YAML file and some settings in Harness.

Another possible issue is a change to an Account setting in Harness or the Git YAML, such as the name of a Cloud Provider.

Harness displays Git errors in the Configuration as Code:

You can also see them in the repo Webhook. For example, GitHub has a Recent Deliveries section at the bottom of the Webhook setting:

For example, some customers' sample scripts are based on an input in a UI or Shell Script that generates YAML stored in Git. The YAML is then synced to Harness through the Git Sync process on the push event.

You can use tools like yq to manipulate specific YAML fields inline. Tools like yamllint are excellent for validating YAML.

If there are issues, Harness displays Git Sync errors in Configure As Code.

This topic showed you how Git can be used for safe, version-controlled, easy Harness component management.

Managing new Harness Application setup in Git brings deployment closer to developers. It enables them to live in their code.

With Harness Git support, developers don't need to check deployment status in the Harness Manager UI. For example, they can use Harness GraphQL. Here's a simple Pipeline executions query and result:

In addition, Harness Application that live in code are reusable and versioned. If anything breaks, there is a working version to revert back to.