You can also use them in some Harness Service settings in order to have their values replaced at the Workflow level.

You provide values for Workflow variables at deployment runtime for the Workflow or a Pipeline executing the Workflow.

There are several different types of Workflow variables you can add:

Currently, this feature is behind a Feature Flag. Contact Harness Support to enable the feature. Feature Flags can only be removed for Harness Professional and Essentials editions. Once the feature is released to a general audience, it's available for Trial and Community Editions.

See New features added to Harness and Features behind Feature Flags (Early Access) for Feature Flag information.For Text and Email types, in Allowed Values, you can enter multiple options by separating them by commas. 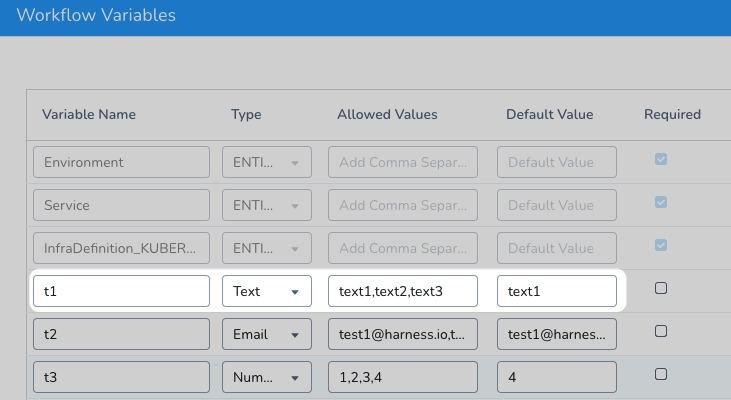 When you deploy the Workflow, the values appear as a dropdown, with the Default Value already selected: 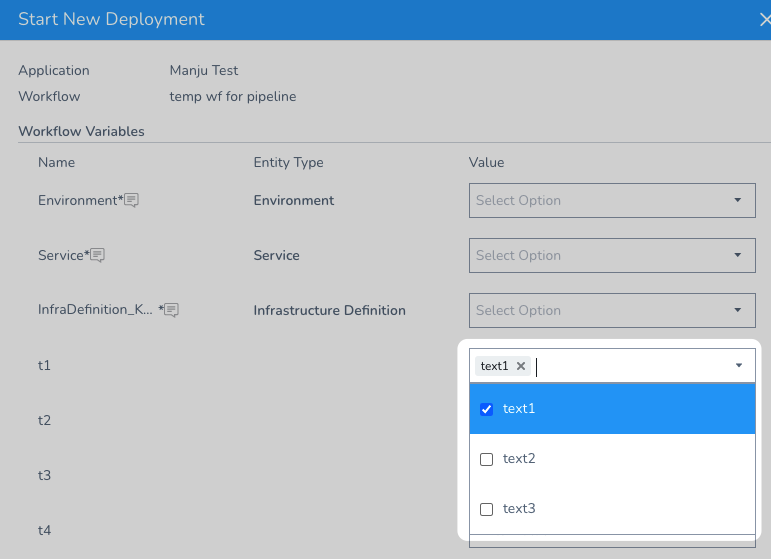 The same options will be available when the Workflow is used in a Pipeline and Trigger.

You can also search for values by simply entering the search values in the dropdown.

When you type into the dropdown to search for Allowed Values, be sure to select one or more values and not hit Enter. If you hit Enter, your search term will be used and if it is not exactly the same as an Allowed Value, it will fail during execution.

When Harness runs a Pipeline, it will encounter the Workflow variable in the first stage where it is used. Harness will resolve that variable to a value. Each subsequent use the a Workflow variable with the same name in the same Pipeline will now also use that value.

To use Workflow variables, do the following:

When you deploy the Workflow, by itself or as part of a Pipeline, the variables are displayed in the Workflow execution step.

If the variables require values, you will enter the values when you add the Workflow to a Pipeline in the Stage settings or in the New Deployment setting when you deploy the Workflow individually.