You can integrate testing into Harness Workflows, such as unit, functional, and smoke and sanity tests.

In this topic we will walk you through common test integrations.

Here is a completed Harness Pipeline execution. The Pipeline incorporate the Jenkins unit tests, third-party functional tests, and HTTP smoke tests. In this topic we will be exploring the different tests used in the Pipeline.

The Pipeline skips approval gates and other stages, such as creating a change ticket and updating Jira. These are added to production Pipelines, typically.

You can use Harness to run a build or test process via Jenkins, Bamboo, Shell Script, or any CI tool.

First, you need to connect Harness with Jenkins, Bamboo, or other CI tool.

Use Case 1: Use an Existing Jenkins Pipeline​

Many Harness customers use the Harness Jenkins integration to build and collect artifacts as part of their Pipelines.

Let's look at a Jenkins pipeline execution that uses parameters to skip the build stage and run tests.

In Harness, we'll execute this Jenkins pipeline as part of a deployment Workflow.

In this example, we are running Jenkins locally: 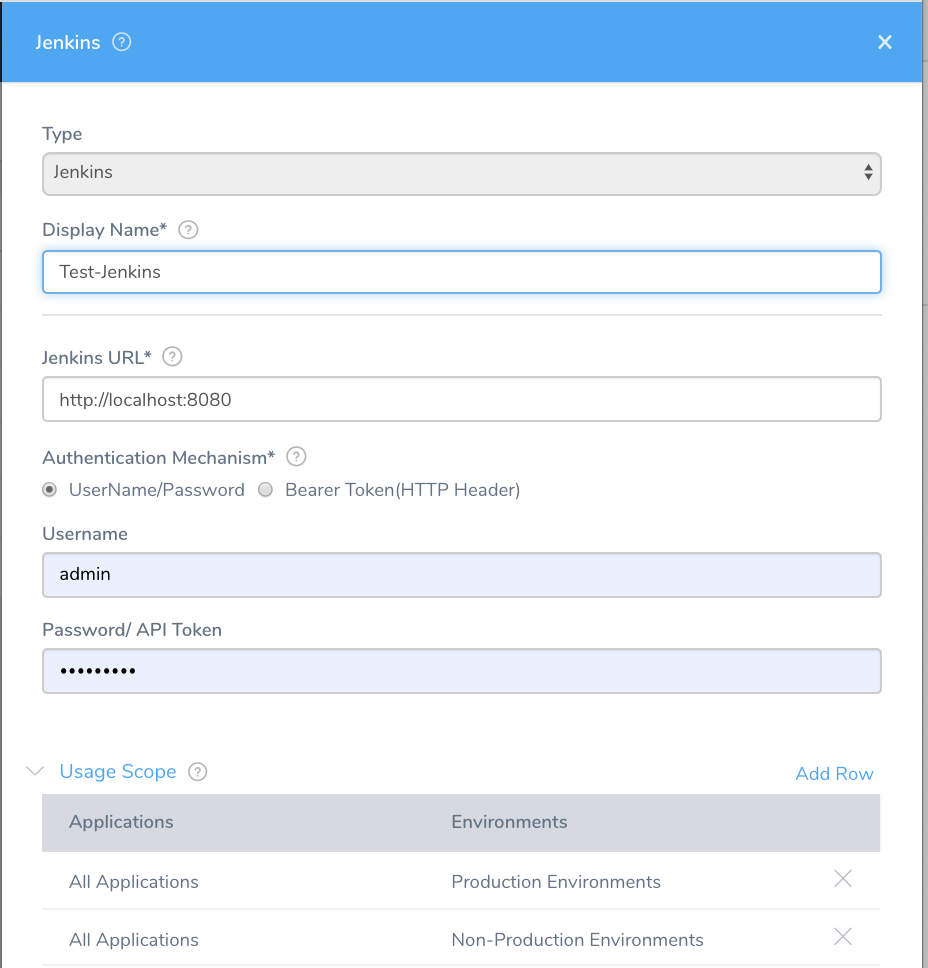 We will create a Harness SSH deployment. This is also called a Traditional deployment.

The same approach works for other types of deployments, such as Kubernetes, ECS, Helm, Pivotal, and so on. For deployments, you would use the corresponding Cloud Providers, and Service and Workflow deployment types.Next, we create the Harness Application with the following components:

The Host Name(s) IP address is one of the hosts you identified in the Infrastructure Definition Host Name(s) setting.

Typically, you would have many Environments such as Dev, QA, UAT, SIT. Each Environment contains an Infrastructure Definitions that can be used for any Service.

This Environment configuration enables the same Workflow to run using different Environments without any additional effort.

You can use Harness variable expressions for values. For example, Service or Workflow variables. Users can assign values when the Workflow is deployed. See Variables and Expressions in Harness.

Let's look at the Workflow execution.

As you can see, the test client is run on the selected test host using the Jenkins pipeline. 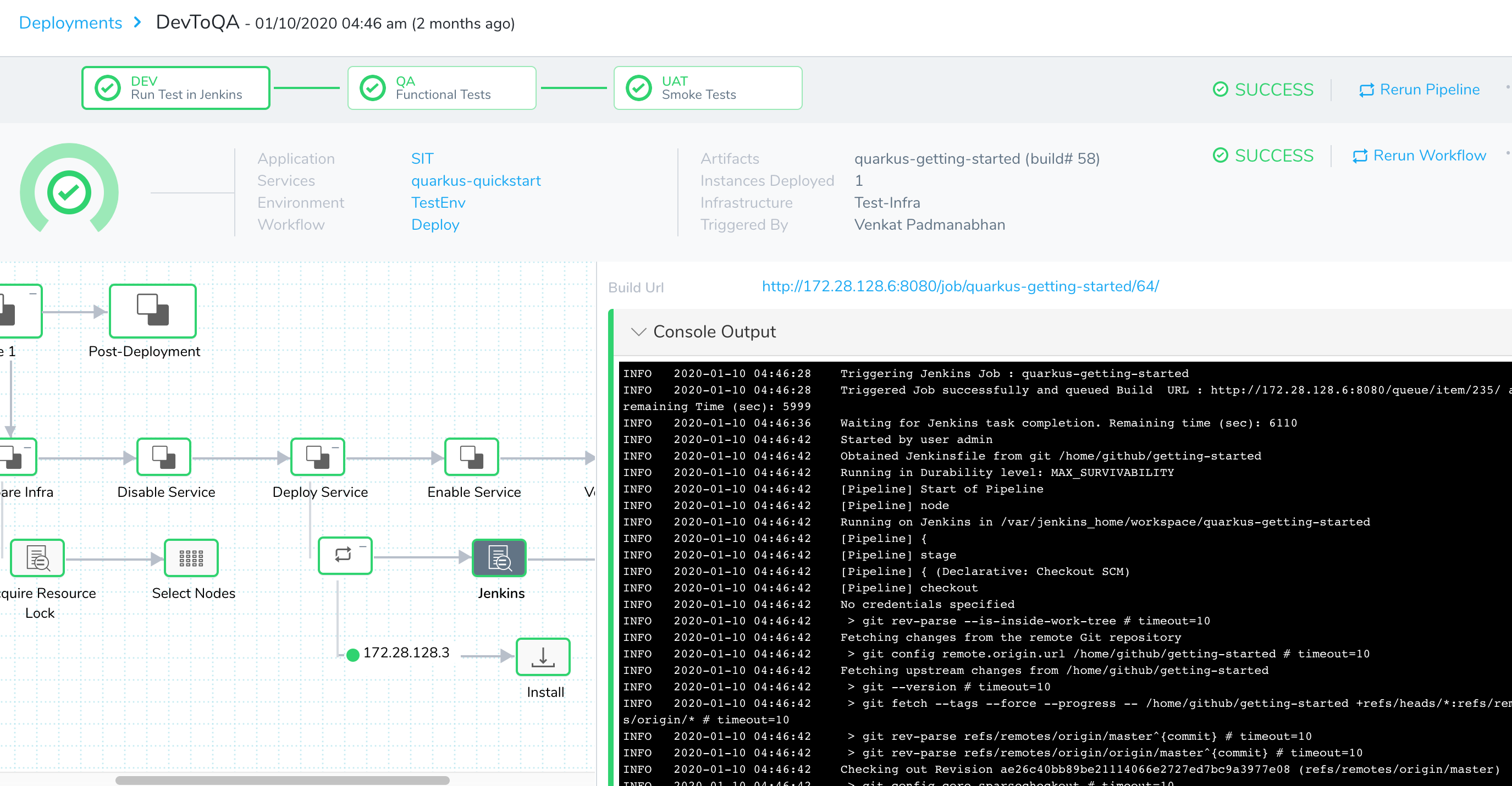 The result of the Jenkins execution is displayed in Details. The pipeline output is also displayed in Console Output.

The Job Status is displayed as SUCCESS. Verify the status using Jenkins blue ocean UI and check the Test Results.

Various testing tools perform functional, load, and stress tests as part of a release. Most of the tests are automated, but some tests can be performed manually.

Let's look at a Basic Secure Shell (SSH) Workflow that uses the same Service and Infrastructure Definition we used in the previous section.

You can see the command to run the collection at the bottom:

When the Workflow is executed, the console output displays the results of the newman CLI.

You can use the same method to run other third party automated testing tools that can be packaged as a Docker image, such as jmeter.

In some cases, the third party tool or home grown testing framework is installed and configured on a specific host instead of packaged as a Docker image.

In these cases, the Shell Script step can be run on the designated host. For example, you could have a designated test host that runs load testing, and another for performance testing.

Here's how the Shell Script step we used is set up: 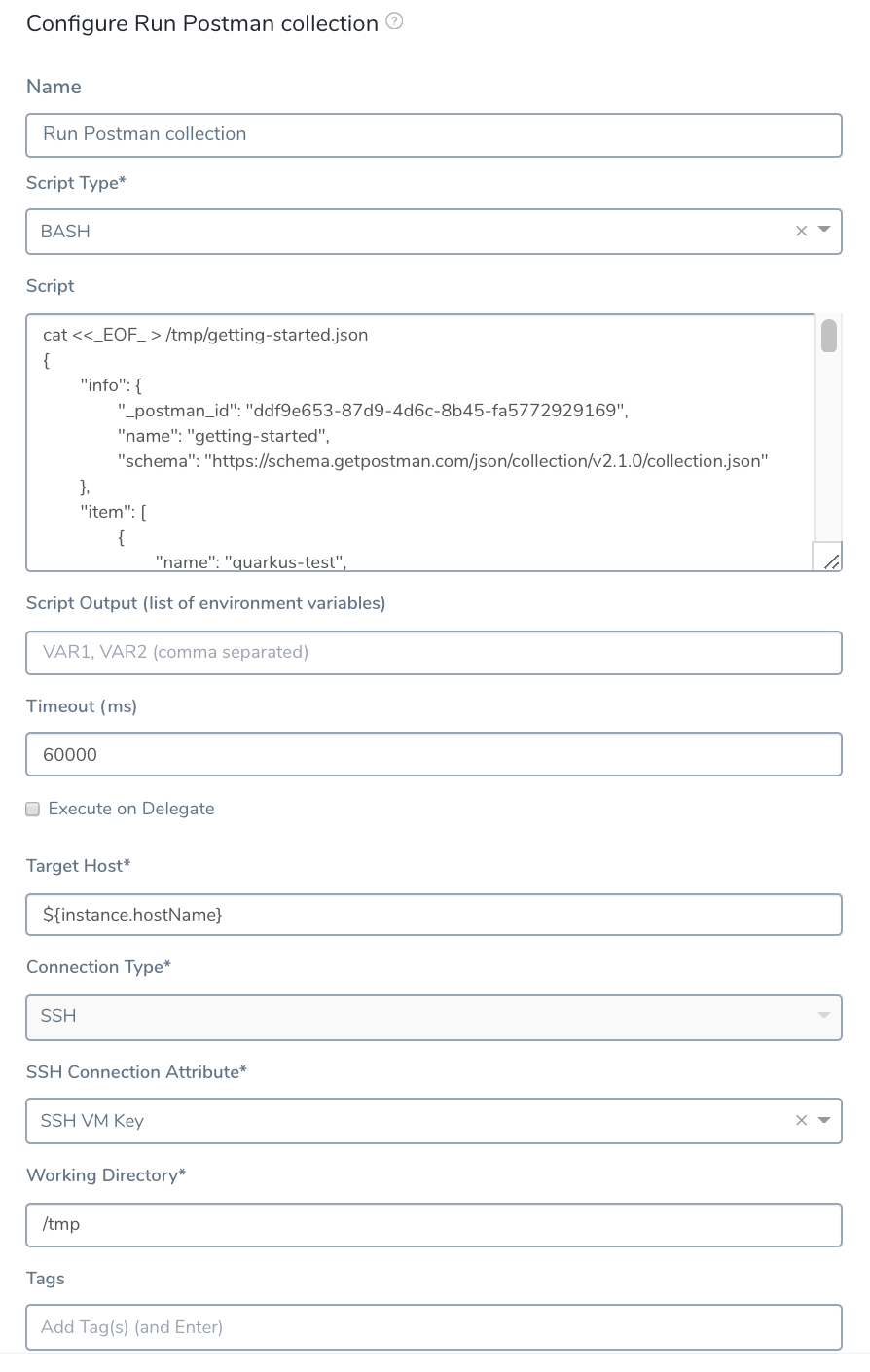 You have the following options of where to run the Shell Script step:

When selecting the target nodes to run a Docker-based test, ensure the nodes are pre-configured with the Docker installation.Integrate Manual Testing — To integrate manual testing in your Harness Pipeline, you simply add an Approval stage in the Pipeline. The Approval stage notifies the test team to execute tests. The team can approve or reject the release based on the test results. For more information about Approvals, see Approvals.

A new application can pass system tests, load tests, and so on, but these tests are not executed on the production deployment, typically.

You still need a way to perform basic smoke or sanity tests before routing production traffic to the new version of the application.

Harness HTTP Workflow step allows you to perform basic smoke or sanity tests without any dependency on third party tools or having test code in the production environment.

To demonstrate, create a Basic Workflow using the same Service and Infrastructure Definition we've been using so far. 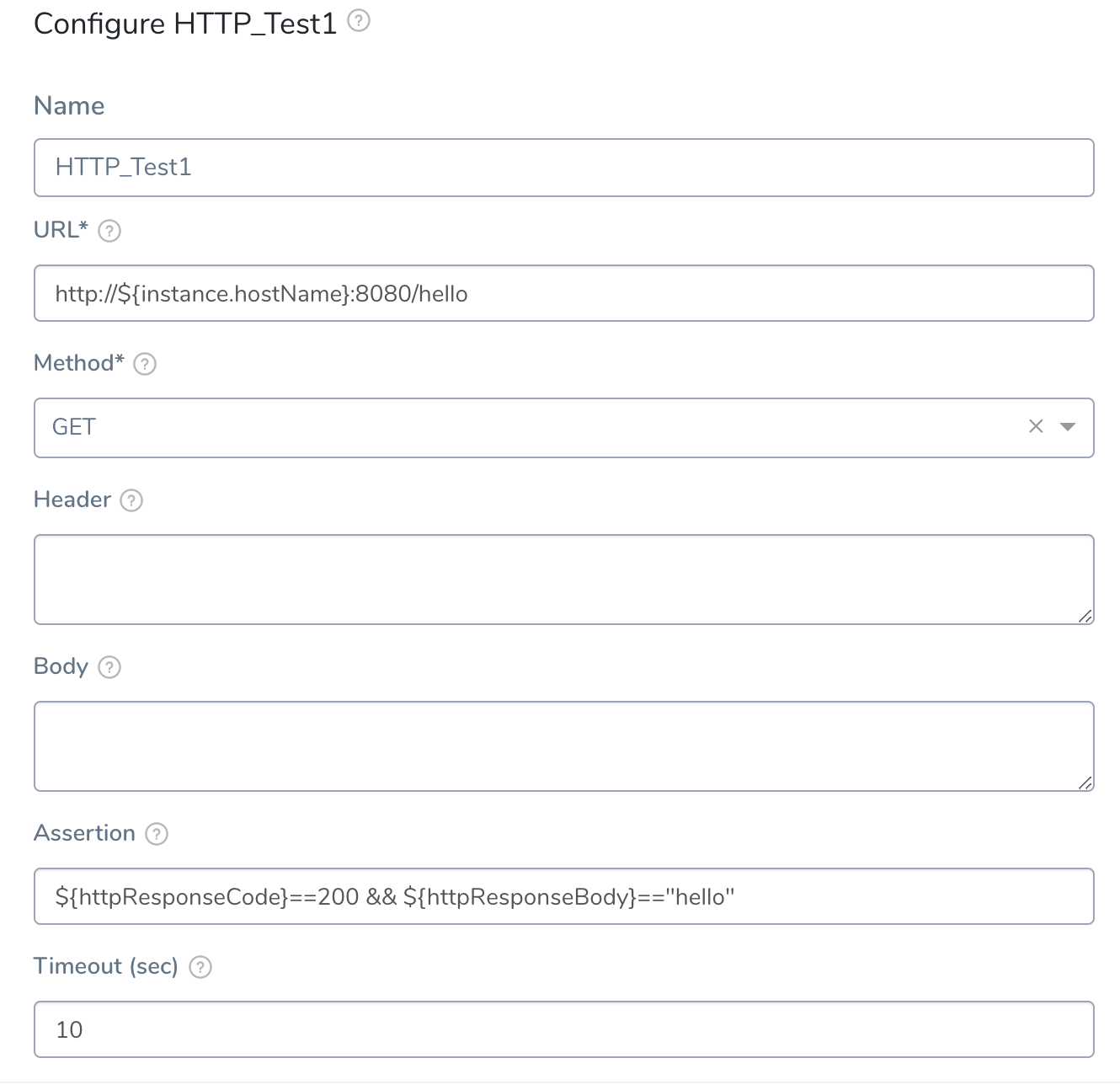 The benefit of this simple test in clear when there is a production deployment failure.

If failure occurs, the Harness Workflow will rollback to the previous successful deployment automatically and immediately.

You can also run multiple HTTP steps in parallel by selecting the Execute steps in Parallel option. 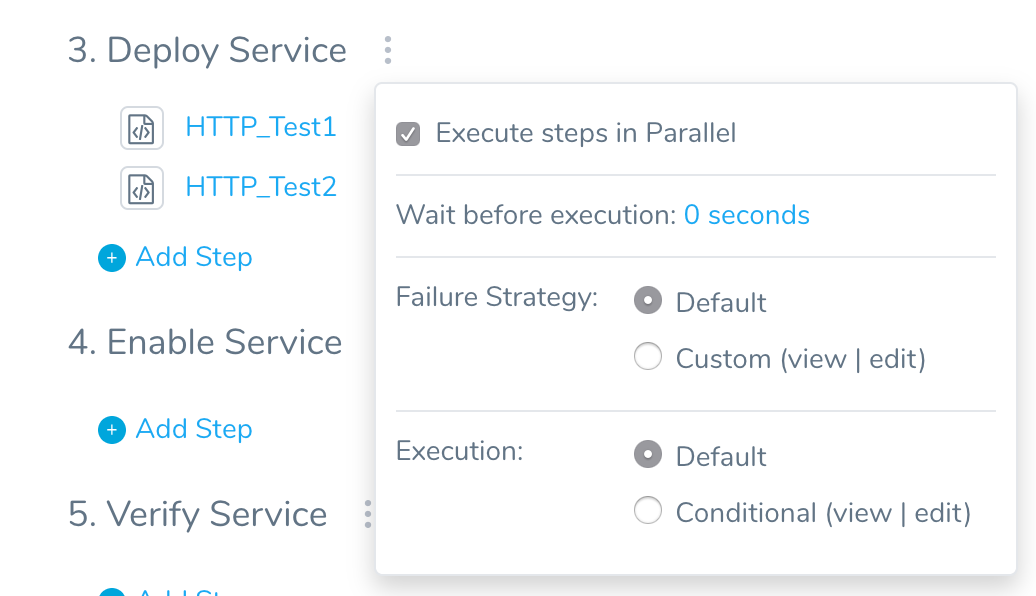 Let's look at the Workflow deployment to see the details of the test:

This use case is a variation of Use Case 2: Use Third Party Testing Tools.

In this case, a Docker image containing the tests is pushed to a Docker registry or artifactory server from a CI tool such as Jenkins. This Docker image is then used to run tests as a container in a Kubernetes cluster or using Docker CLI on a test node.

For this example, the Docker image was built using an Apache Maven base image. The Maven project with test sources and the pom.xml was copied into the image.

We use two Build Workflows in this Pipeline, each with a separate Service: one Workflow to deploy the application and the second to run the Docker-based test.

The Harness Service used by the test Workflow is set up with the Docker test image and a Harness Exec command that uses the Docker CLI. 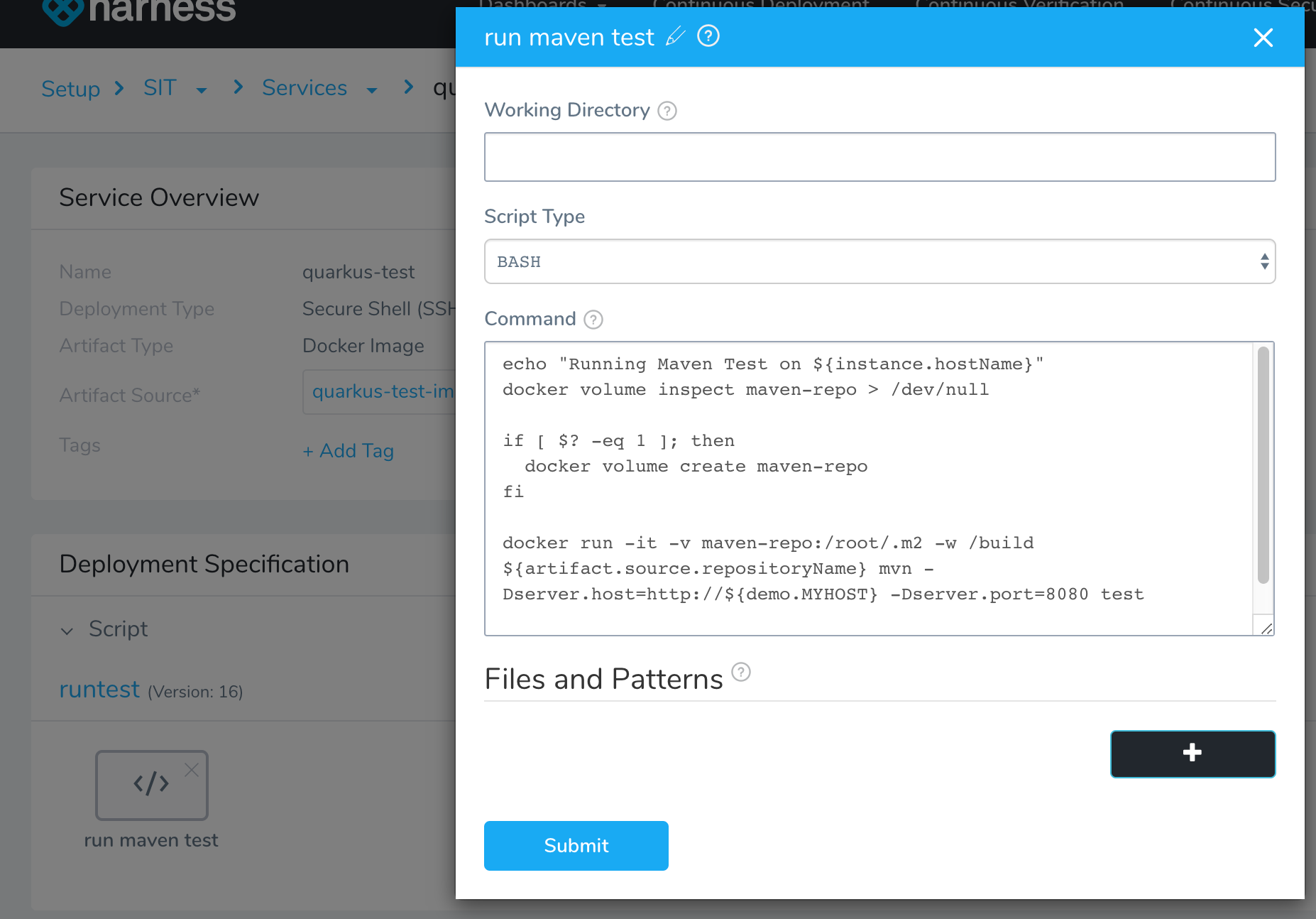 This enables any test host in the infrastructure to execute the tests if its running Docker and has connectivity to the node hosting the REST API.

The Artifact Source in the Service is named quarkus-test-image. It uses a Harness Docker Hub Artifact Server connection to a Docker registry. 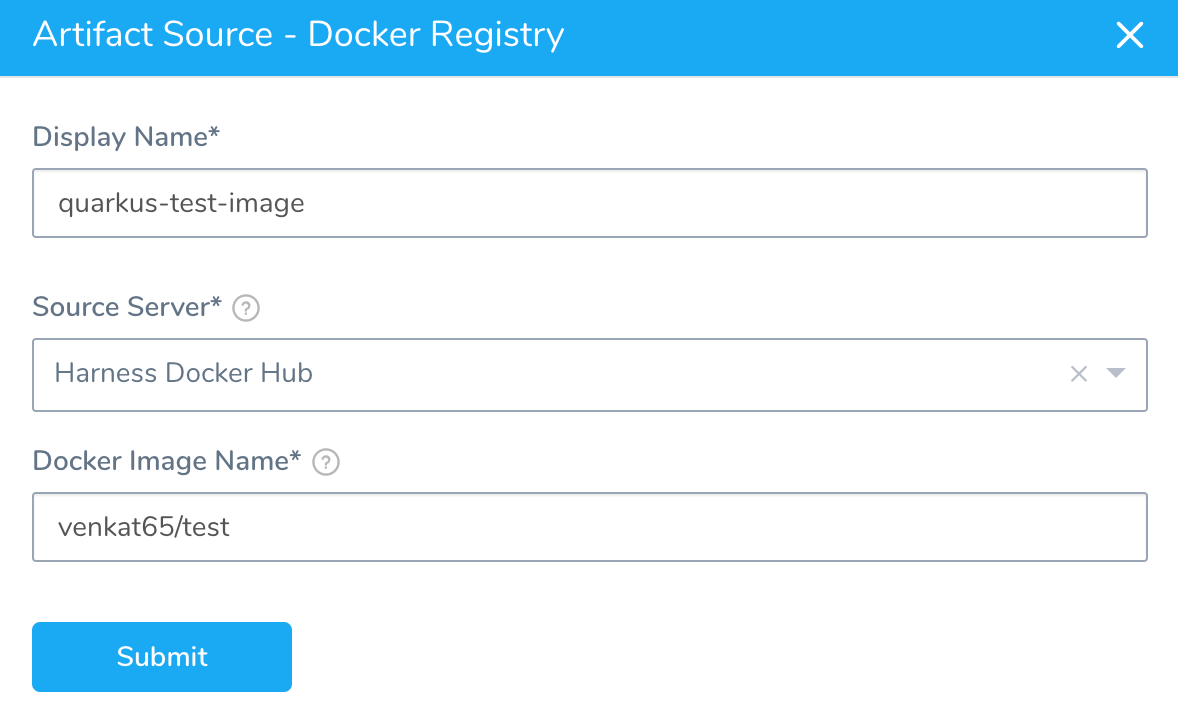 The Docker image is referenced in the run maven test Exec command script as ${artifact.source.repositoryName}.

You can modify the script to specify image tag/version using ${artifact.buildNo}. See Variables and Expressions in Harness.

We is using the latest image (the default). The REST API endpoint listed in the script is at ${demo.MYHOST}. This is a variable published from a Shell Script step in the previous Workflow in the Pipeline. ${demo.MYHOST} is the hostname of the instance where the application was deployed. 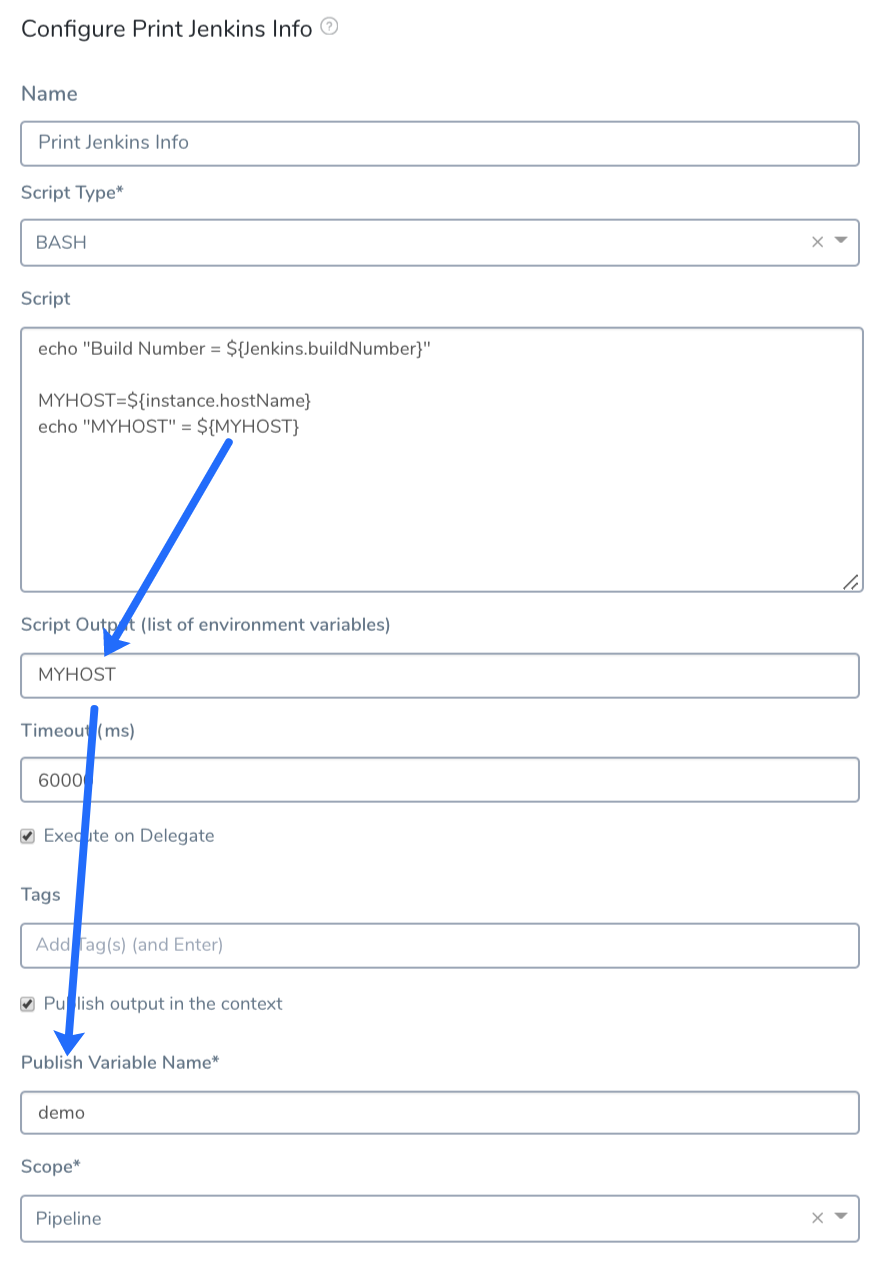 Also, note the use of Docker volume maven-repo. This allows subsequent runs of the test to use the Maven repository cached in the test node.

Let's look at the Workflow execution.

You can see the output of the Exec command in the Details:

With Docker-based tests, provisioning and setting up shared test infrastructure is very simple: you simply need to set up Docker.

The Docker image includes the necessary tools and libraries, so any test node can execute the tests whether it is implemented as Java, Node.js, or other tools.

Since the tests are run as Docker containers, environment variables or files from previous runs do not persist between runs, resulting in repeatable tests.

This article showed you some of the benefits of integrated testing in Harness: