The Rollback Deployment option initiates a rollback of your most-recent successful deployment. This allows rapid, predictable recovery from a deployment that succeeded on technical criteria, but that you want to undo for other reasons.

Harness anticipates expanding this feature to other deployment platforms. 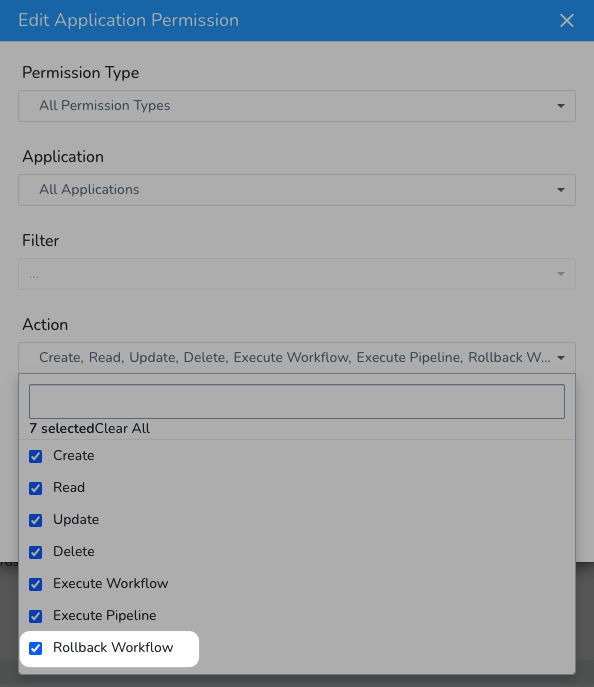 You can also add the Rollback Workflow Application permission via the GraphQL API:

All User Groups that had the Execute Workflow permission enabled will now have Rollback Workflow enabled, also. You can disable it if needed.

Before you begin, please review Requirements and Warnings.To initiate a post-deployment rollback:

Rollback Deployment will execute Rollback Steps on your deployment according to the Workflow's current configuration. Make sure the Workflow (including any variables) has not been reconfigured since this most-recent deployment, or the rollback can have unpredictable results.A deployment's Rerun option will be unavailable during, and following, a post-deployment rollback.In order to use Post-Deployment rollback, the following requirements must be met:

Currently, this feature is behind the feature flag WINRM_ASG_ROLLBACK. Contact Harness Support to enable the feature.By default, Harness rolls back the instances that are initially deployed. When using Post-Deployment rollback, this list of instances could differ from the initial list.

This method ensures that all instances are rolled back, including those initially deployed and those instances that appeared due to the ASG.

Let's look at an example.

If a Workflow uses an Infrastructure Definition that includes an AWS Cloud Provider and and ASG, then its Post-Deployment rollback is handled in the following way.

Let’s say before/during deployment, we have i1,i2,...,i8 (8 instances) and we have a 4 phase Canary Workflow defined with these percentages:

During Post-Deployment rollback we have 15 instances, some old and some new.