This topic describes how to set up a Harness Infrastructure Provisioner for Terragrunt. You simply link Harness to the repo where your Terragrunt config files are located.

Once the Harness Infrastructure Provisioner is set up, you can use it in two ways:

Here is a visual summary of how you use your and Terragrunt and Terraform files with Harness to provision target infra and then deploy to it:

In this use case, you simply add the Terragrunt Provision step to your Workflow and it runs some Terragrunt commands to provision some non-target resources in your infrastructure. 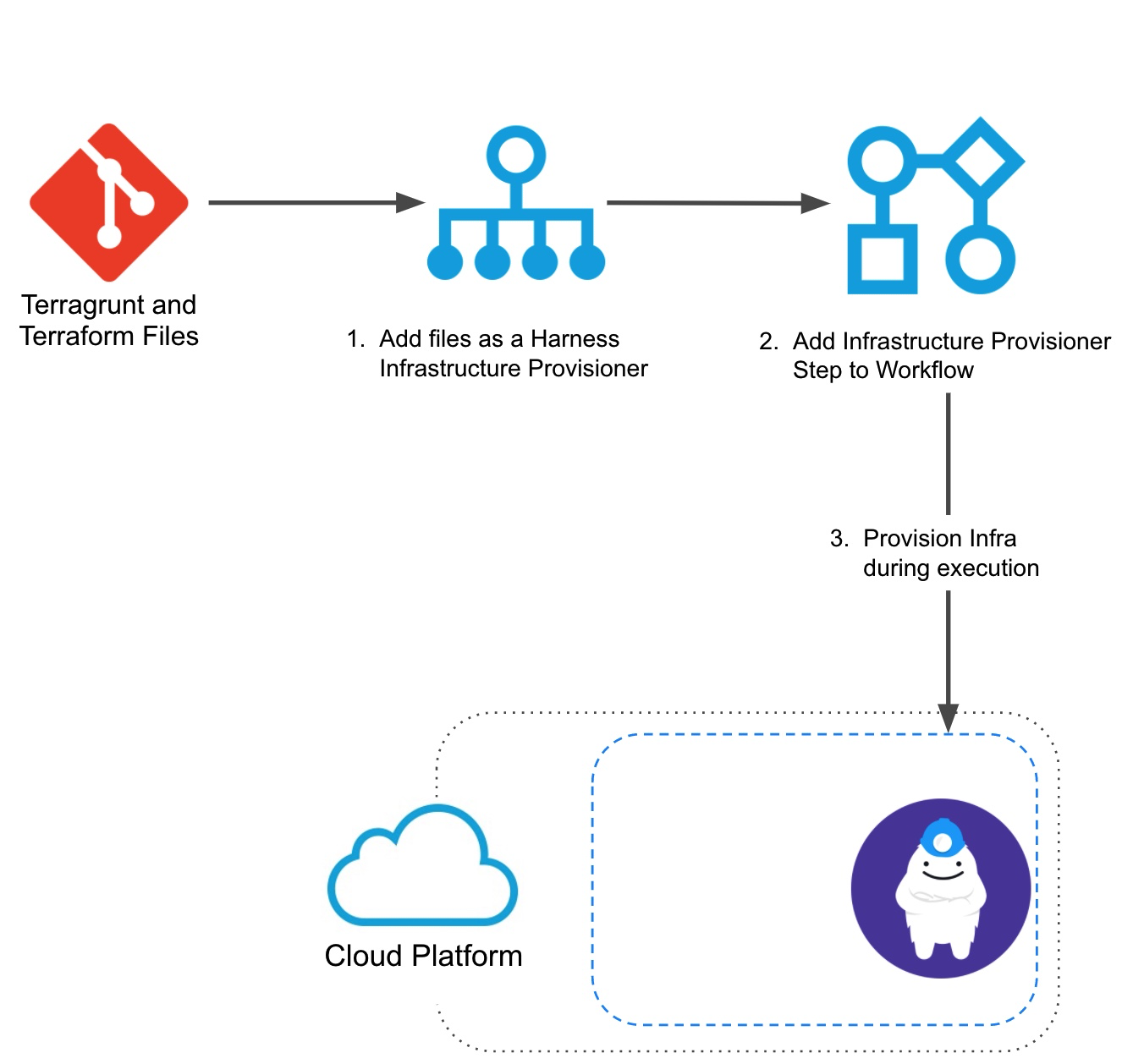 To set up a Terragrunt Infrastructure Provisioner, do the following:

Click Next. The Script Repository section appears. This is where you provide the location of the root module in your Git repo.

In Script Repository, in Git Repository, select the Source Repo Provider you added for the Git repo where your script is located. See Set Up Your Harness Account for Terragrunt.

In Commit, select Latest from Branch or Specific Commit ID:

In Path to Terragrunt Root Module, enter the folder where the root module is located. Enter . for root.

Option: Use Expressions for Script Repository​

You can also use expressions in the Git Repository Branch and Path to Terragrunt Root Module and have them replaced by Workflow variable values when the Terragrunt Provisioner is used by the Workflow.

For example, a Workflow can have variables for branch and path:

When the Workflow is deployed, you are prompted to provide values for the Workflow variables, which are then applied to the Script Repository settings.

This allows the same Terragrunt Provisioner to be used by multiple Workflows, where each Workflow can use a different branch and path for the Script Repository.

In Terraform Plan Storage Configuration, select a Secrets Manager to use for encrypting/decrypting and saving the Terraform plan file.

A Terraform plan is a sensitive file that could be misused to alter cloud provider resources if someone has access to it. Harness avoids this issue by never passing the Terraform plan file as plain text.

Harness only passes the Terraform plan between the Harness Manager and Delegate as an encrypted file using a Harness Secrets Manager.

When the terraform plan command is run on the Harness Delegate, the Delegate encrypts the plan and saves it to the Secrets Manager you selected. The encrypted data is passed to the Harness Manager.

When the plan is going to be applied, the Harness Manager passes the encrypted data to the Delegate.

To understand this setting, let's review some of the options available later when you will use this Terragrunt Infrastructure Provisioner with a Terragrunt Provision step in your Workflow.

When you add that step, you can run it as a Terragrunt plan using the Set as Terragrunt Plan setting.

Essentially, these settings allow you to use your Terragrunt Provision step as a terragrunt plan (Terraform plan dry run).

During this inheritance, Harness runs a Terraform refresh, then a plan, and finally executes the new plan.

If do not want Harness to perform a refresh, enable the  Skip Terragrunt Refresh when inheriting Terraform plan option in your Terragrunt Infrastructure Provisioner.

When this setting is enabled, Harness will directly apply the plan without reconciling any state changes that might have occurred outside of Harness between plan and apply.

This setting is available because a Terraform refresh is not always an idempotent command. It can have some side effects on the state even when no infrastructure was changed. In such cases, terraform apply tfplan commands might fail.

When you are done, the Terragrunt Provisioner will look something like this:

Now you can use this provisioner in both Infrastructure Definitions and Workflows.