Currently, this feature is behind a Feature Flag. Contact Harness Support to enable the feature. Feature Flags can only be removed for Harness Professional and Essentials editions. Once the feature is released to a general audience, it's available for Trial and Community Editions.You can use Vault Secrets Engine Signed SSH Certificates in Harness.

The setup process is simple. You add your private key to Harness as an encrypted key file, specify the Vault SSH Engine to use, paste in the public key, and specify the Vault role used for signing client keys.

You add the trusted public key to all target host's SSH configuration (and restart the SSH service to pick up the changes). This process can be manual or automated using a configuration management tool.

When you SSH into a host machine using the signed key, you supply both the signed public key from Vault and the corresponding private key as authentication to the SSH call. For example:

In Harness, you are simply providing the same information in the Harness SSH Key settings: 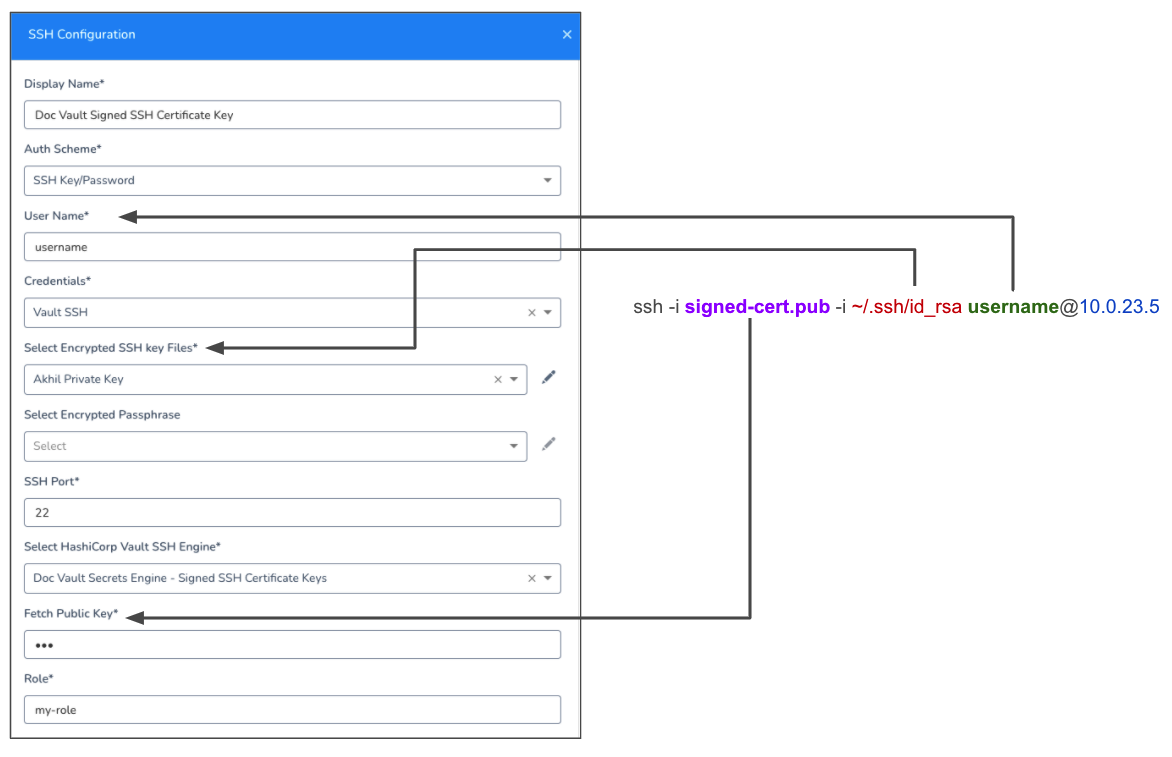 Next, you use the SSH key in a Harness Infrastructure Definition as the target host(s) connection method.

During deployment, the Harness Delegate connects to the Vault server and exchanges the public key for a new certificate.

The rest of the setting are described in Add a HashiCorp Vault Secrets Manager.

You will enter the Vault URL for the Vault server running the Secrets Engine.

Ensure you select the Secrets Engine that will validate the public key from Vault and your corresponding private key.

When you are done, the Secrets Manager will look something like this:

Enter a name that identifies the SSH key in Display Name.

In User Name, enter the name of the user specified when generating the public key (for example, ssh-keygen -t rsa -C "[email protected]").

Users are mapped to roles. They can be mapped many to one.

In Select Encrypted Passphrase, select the SSH key passphrase from the drop down if one is required.

It is not required by default for HashiCorp Vault SSH Engine.

In SSH Port, leave the default 22 or enter in a different port if needed.

Ensure you select the Secrets Engine that will validate the public key from Vault and your corresponding private key.

Paste in the contents of the public key.

Enter the role name of the Vault role used for signing client keys.

For example, if you create a role with vault write ssh-client-signer/roles/my-role, enter my-role in the Role setting in Harness.

Enter the public address the host you want to connect to use the SSH key.

Harness should show a successful test of the SSH key. If you have errors, check Troubleshooting from Vault.

Now you can use this SSH key in Harness Infrastructure Definition Connection Attributes settings when defining connection setting to a target hosts.