Harness variable expressions are used to parameterize settings in your Harness components, create environment variables, and create templates that can be used by your team.

For example, you can use an expression containing the variable name account to refer to account properties:

Harness includes two types of variables that you can use in expressions:

All expressions are evaluated immediately and use the ${} delimiters. Harness uses the Java Expression Language (JEXL) expression language to render variables.

For information on passing variables from a Trigger to a Workflow, see Passing Variables into Workflows from Triggers.

To use a variable, you enter the variable name inside ${...} expression. For example, to obtain the name of a Harness application, you would use the expression ${app.name}.

Harness permits variables only within their scope. You will not see a variable available in a field where it cannot be used.Variables can be used with methods. For example, here is an object using the expression ${instance.hostName}:

Do not use hyphens (dashes) in variable names, as some Linux distributions and deployment-related software do not allow them.

JEXL supports all Java String methods. You can use these methods wherever you use expressions in Harness.

For example, here is an object using the expression ${instance.hostName}:

You can manipulate strings just like you would in Java. Here's another example where JEXL is operating on a JSON data payload received from New Relic and the JAVA String replaceAll() method is applied:

What Expressions Am I Already Using?​

An easy way to see what expressions are already used in your deployments is to look at the Execution Context for each Workflow step:

The expressions used in that step are displayed.

If an expression is too long to view, hover over it to see its full name.

Now you can reference those expressions elsewhere in your Workflow or Pipeline, in the set up of the Workflow, or in command such as Shell Script.

You can create variables in Services and Workflows.

Some Workflow commands let you publish their output as variables:

When are Variable Expressions Evaluated?​

What if Harness Can't Resolve an Expression?​

If Harness cannot resolve an expression to a value, it simply outputs the expression itself.

You can define account-wide variables that can be referenced by any Application and entity in your account.

To create an Account Default variable, do the following:

For example, you can add a username as an encrypted text item, named Username, and then reference it using the variable ${secrets.getValue("Username")}.

By default, the ${secrets.getValue("var_name")} is available in the Harness Applications listed in its Usage Scope. To make the secret available Account-wide, so that it can be used in a Delegate Profile, you must select the Scope to Account option:

For an extended example, see Using Secrets in a Profile.

When you create variables in a Harness Service's Config Variables section, they can be referenced anywhere that Service is used in your Workflow. For more information, see Add Service Config Variables.

You reference the Service Config Variable using the ${serviceVariable.your_var_name} format.

The Service Config Variables are added to your target hosts as Environment variables.

For example, if you have a Service Config Variable named jarName, Harness creates an environment variable name jarName that can be referenced in two ways:

Files added in the Config Files section of a Service are referenced using the configFile.getAsString("fileName") Harness expression:

Anywhere that variables are allowed in Harness, methods using the variable are also allowed. Methods follow Java regex pattern format, and operators may be used in building expressions.

For example, here is an object using the variable, ${artifact.source.repositoryName}:

The Regex Functor allows you to operate over variables using regular expressions.

For example, the following argument is a regular expression in Java regex format that extracts the first matching non-empty substring:

It resolves to "3935". If there were no matching substring, it would resolve as an empty string.

The next argument uses operators to extract the substring and its iteration number:

The AWS functor allows you to operate over complex objects returned from the AWS API.

For example, the following arguments use AWS Tags to find a tag with a particular key. In this example, the tags collection is:

The first argument resolves to an empty string because find() is case sensitive and the tag name is "Name":

The next argument finds the tag Name and resolves to ”main-service”:

Harness also supports the Java StrSubstitutor class for taking a piece of text and substituting all the variables within it. This can useful because it includes many static convenience methods for replacing variables.

The Deployments page in Harness Manager displays the output of any of the Harness built-in variables, or third-party API calls, that you use in its Execution Context panel.

Here is an example of the Harness variables in a Shell Script command in a Kubernetes Workflow: 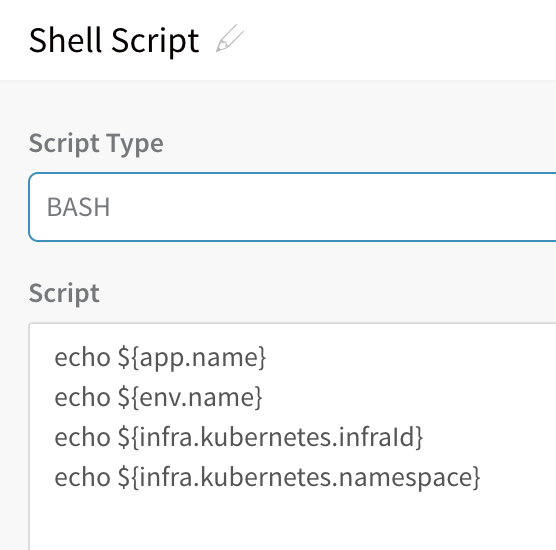 Here is the output of these variables displayed in the Execution Context panel:

To see the output from third-party API calls, you select a Verification Provider node, and then click View 3rd Party API Calls option: 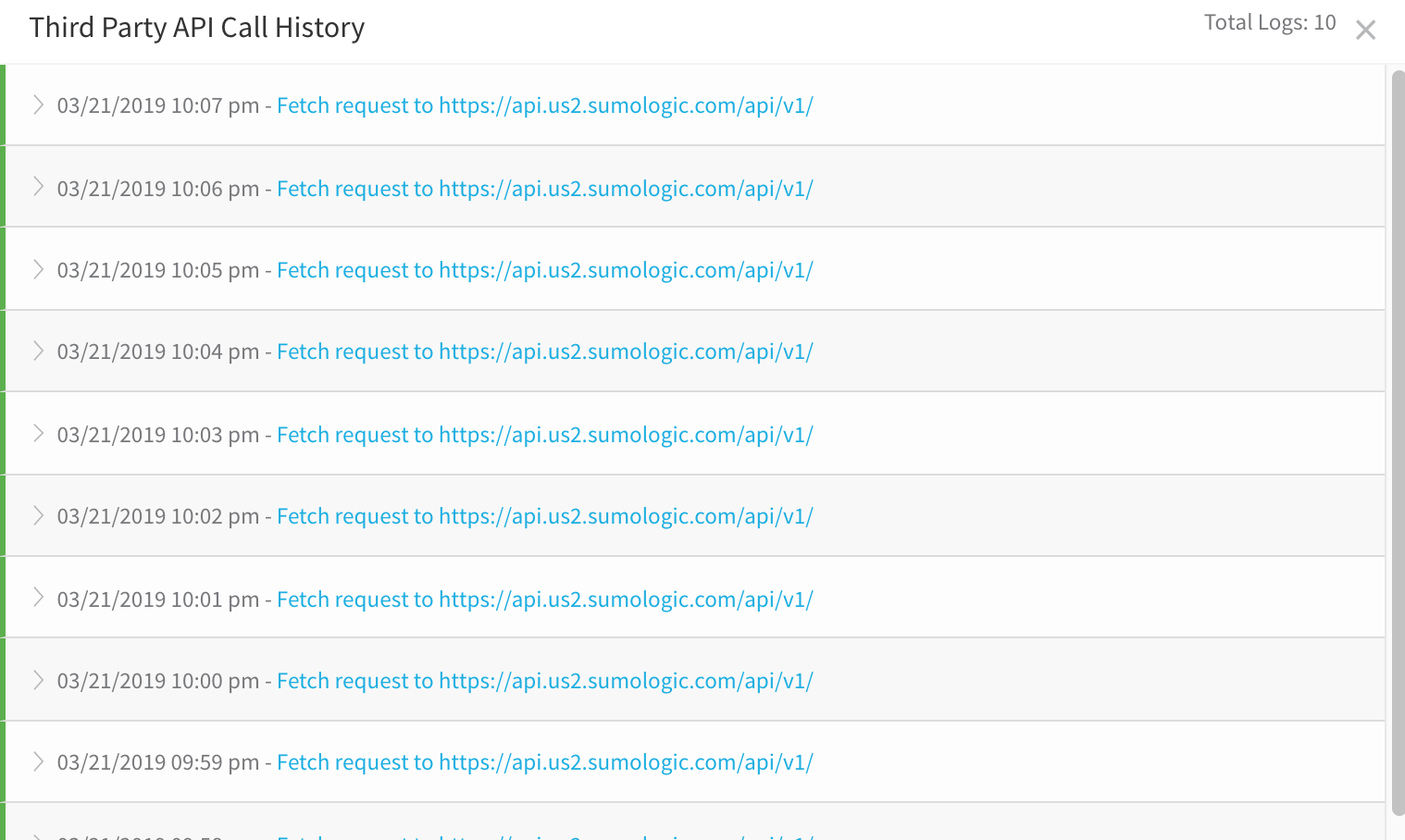 Clicking the API call links displays the request and response for the call: 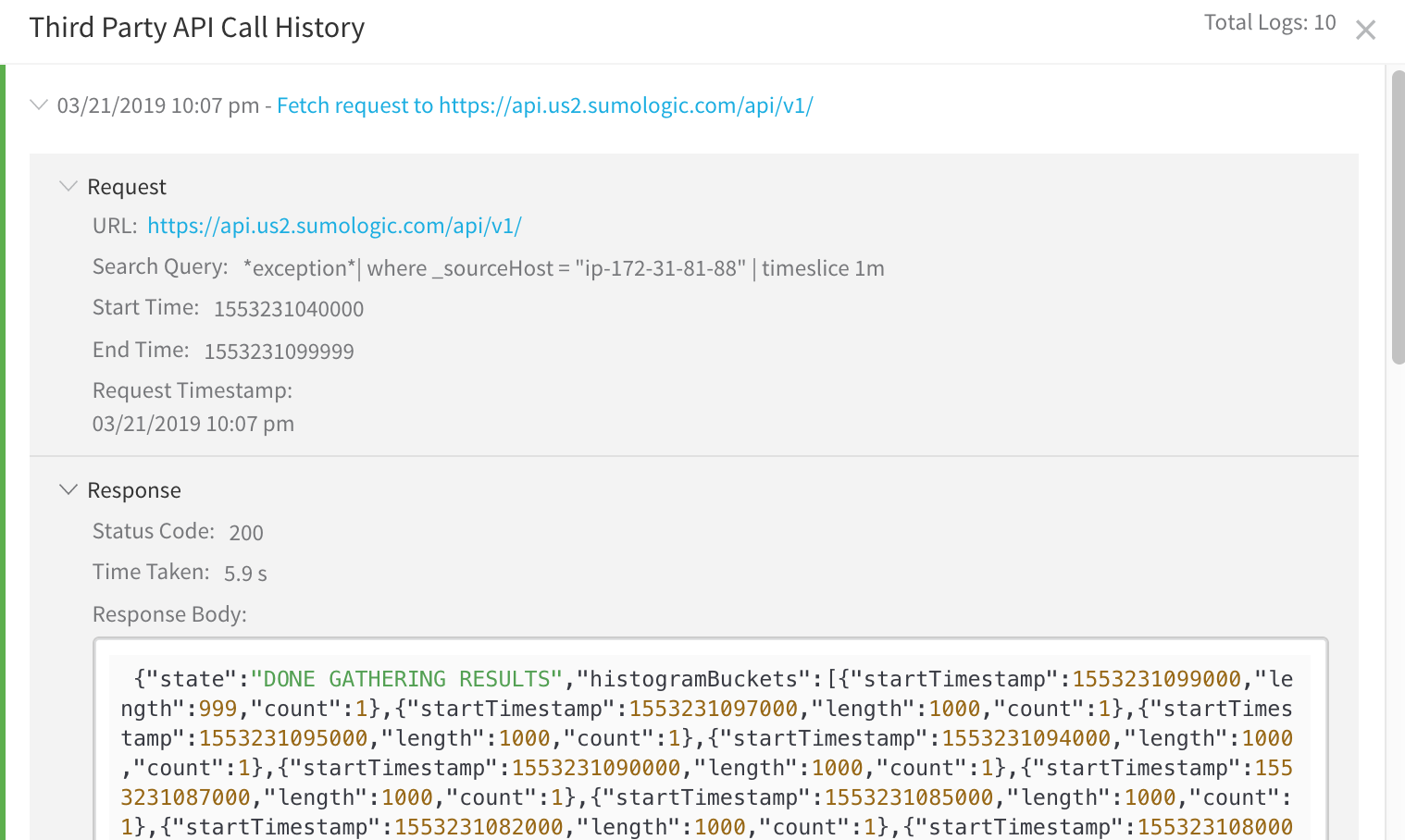 Some Workflow commands contain a lot of variable output information. An example is the Install command: 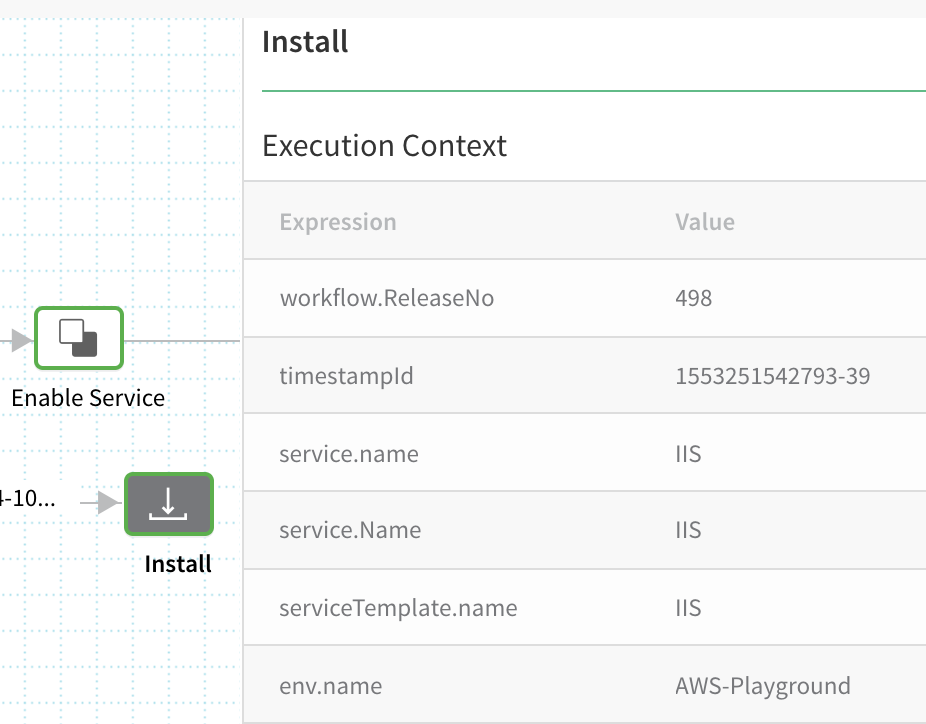