To store and use encrypted secrets (such as access keys), you can add a HashiCorp Vault Secret Manager.

This topic assumes you have a Harness Project set up. If not, see Create Organizations and Projects.

You can add a Connector at Project/Organization/Account scope. To do this, go to Project setup, Organization, or Account Resources. 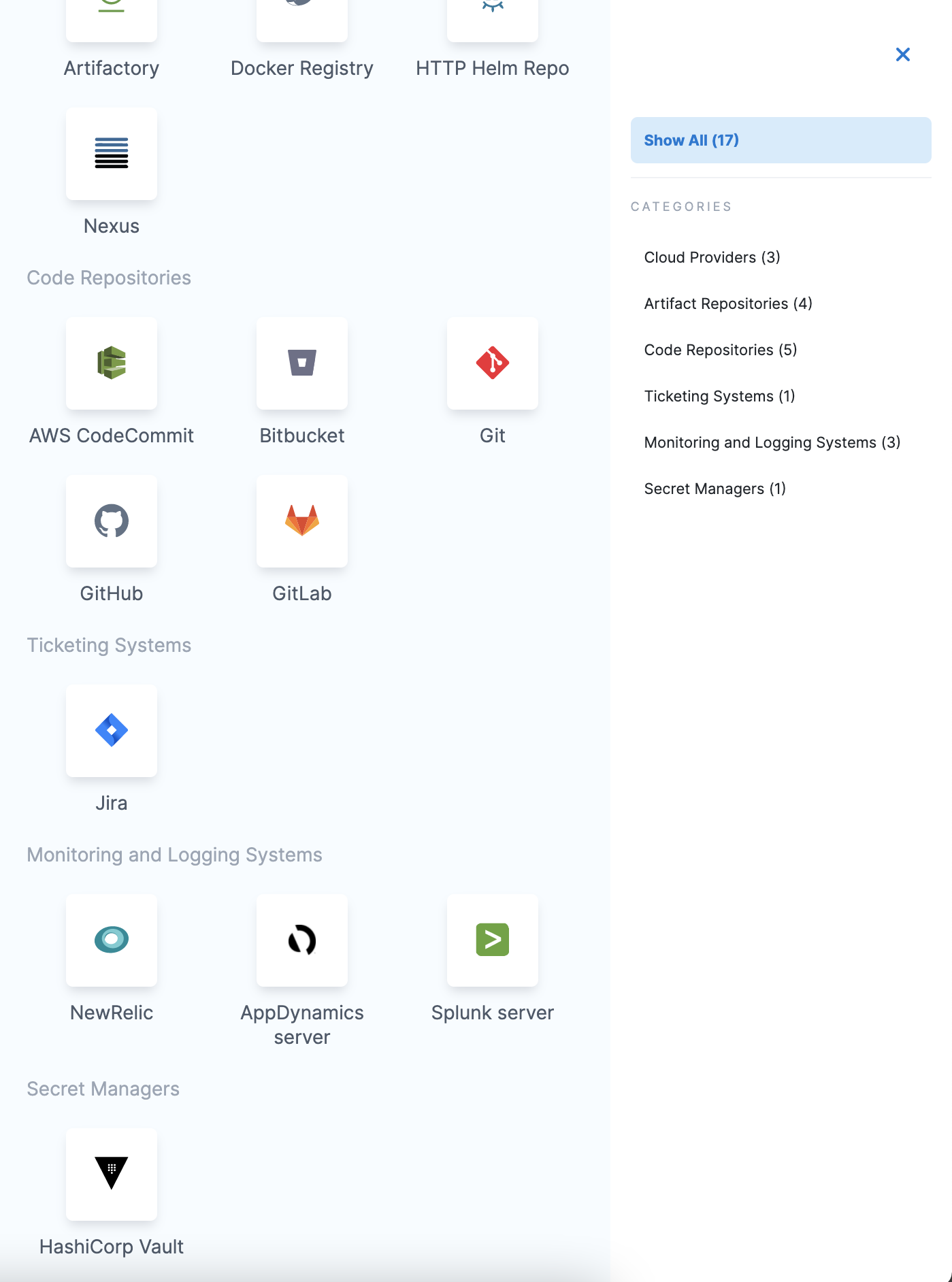 Enter a Name for your secret manager.

You can choose to update the ID or let it be the same as your secret manager's name. For more information, see Entity Identifier Reference.

Enter Description for your secret manager.

Enter Tags for your secret manager.

The Vault AppRole method allows you to define multiple roles corresponding to different applications, each with different levels of access. The application's App Role ID and Secret ID are used for authentication with Vault. You need these to log in and fetch a Vault token.

To assign a Secret ID, you can create a new Secret or choose an existing one.

The Secret should not expire and it should be valid until you manually revoke it. You would need this Secret to generate new tokens when the older tokens expire.Harness will use the App Role ID and Secret ID that you supply, to fetch a Vault Auth Token dynamically at configured intervals. This interval is set in Renewal Interval.

If you encounter errors, setting token_num_uses to 0 can often resolve problems.

The Vault AppRole ID or the Periodic Token used in either of the authentication options must have an ACL policy attached so that Harness can use it. Typically, you create the policy first, then create the AppRole or Periodic Token and attach the policy.

In the policy examples below: if you've created a Read-only Vault Secret Manager, this secret manager needs only read, and list permissions on Vault. It does not need — and cannot assume — create, update, or delete permissions.If the secrets are in the Secret Engine named “secret”, the policy must have the following permissions.

These examples apply only to a v1 secret engine. If you are planning to use a secret engine with version 2 (versioned secret engine), then the policies are different as explained here. Go through this link to understand the correct permissions required for your use case.If the Vault Secret Manager needs to renew tokens, the following permissions are needed:

For Harness, the Token option requires periodic tokens (tokens that have renewal options).

To create a periodic token, make sure to specify a period in the token creation command:

Next, use the new token with Harness. To do this, perform the below steps:

If you have already added a Secret with your token, you can choose the same as shown below: 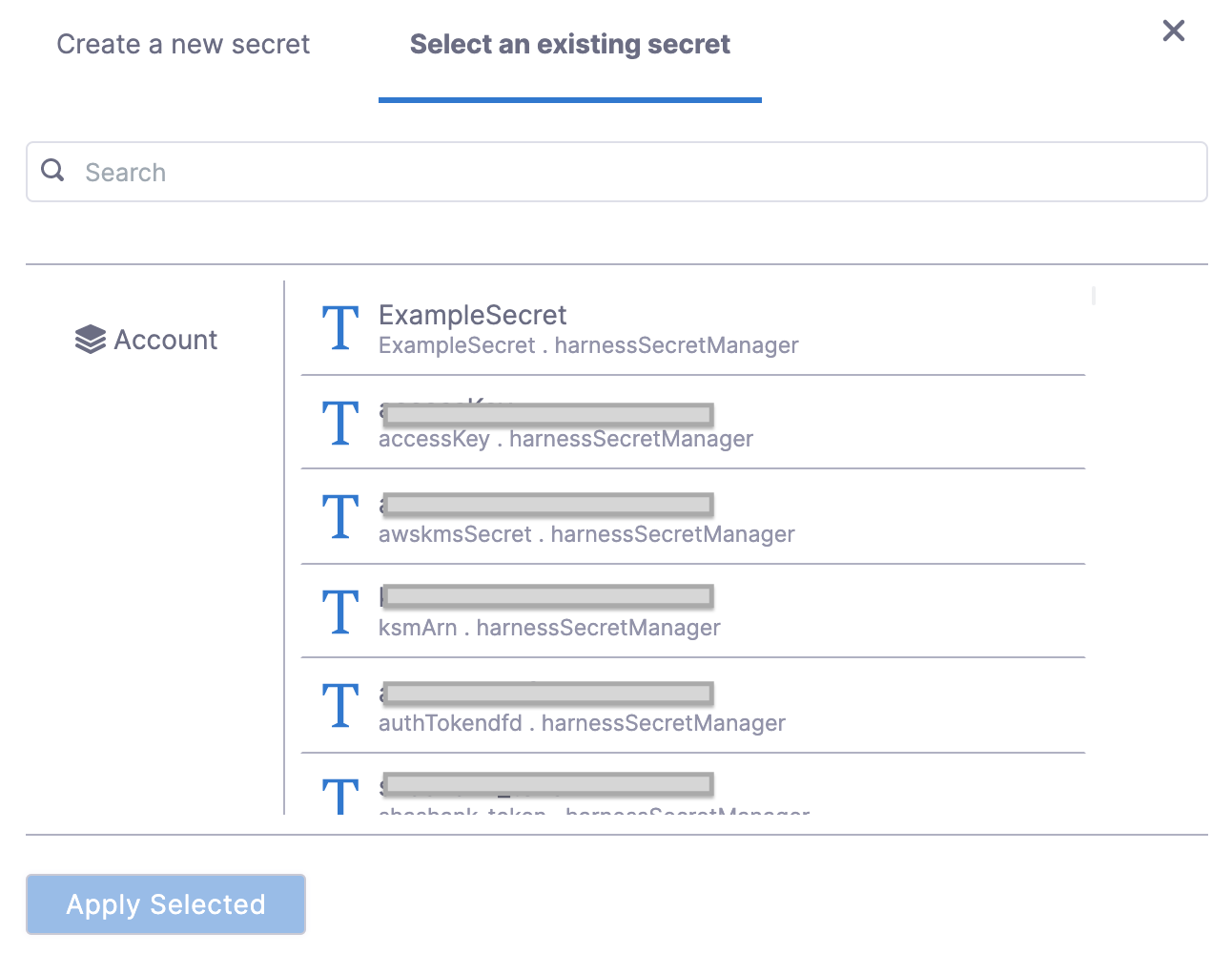 If you want to verify the renewal manually, use the command:

This option enables the Harness Vault Secret Manager to authenticate with the Auto-Auth functionality of the Vault Agent.

To authenticate with Vault Agent, make sure you have configured it on the required environment, with entries for method and sinks. For more information, see Vault Agent.

In the Sink Path field, enter any sink path you have in your Vault Agent Configuration. This is the path of the encrypted file with tokens. The specified Delegate reads this file through file protocol (file://). 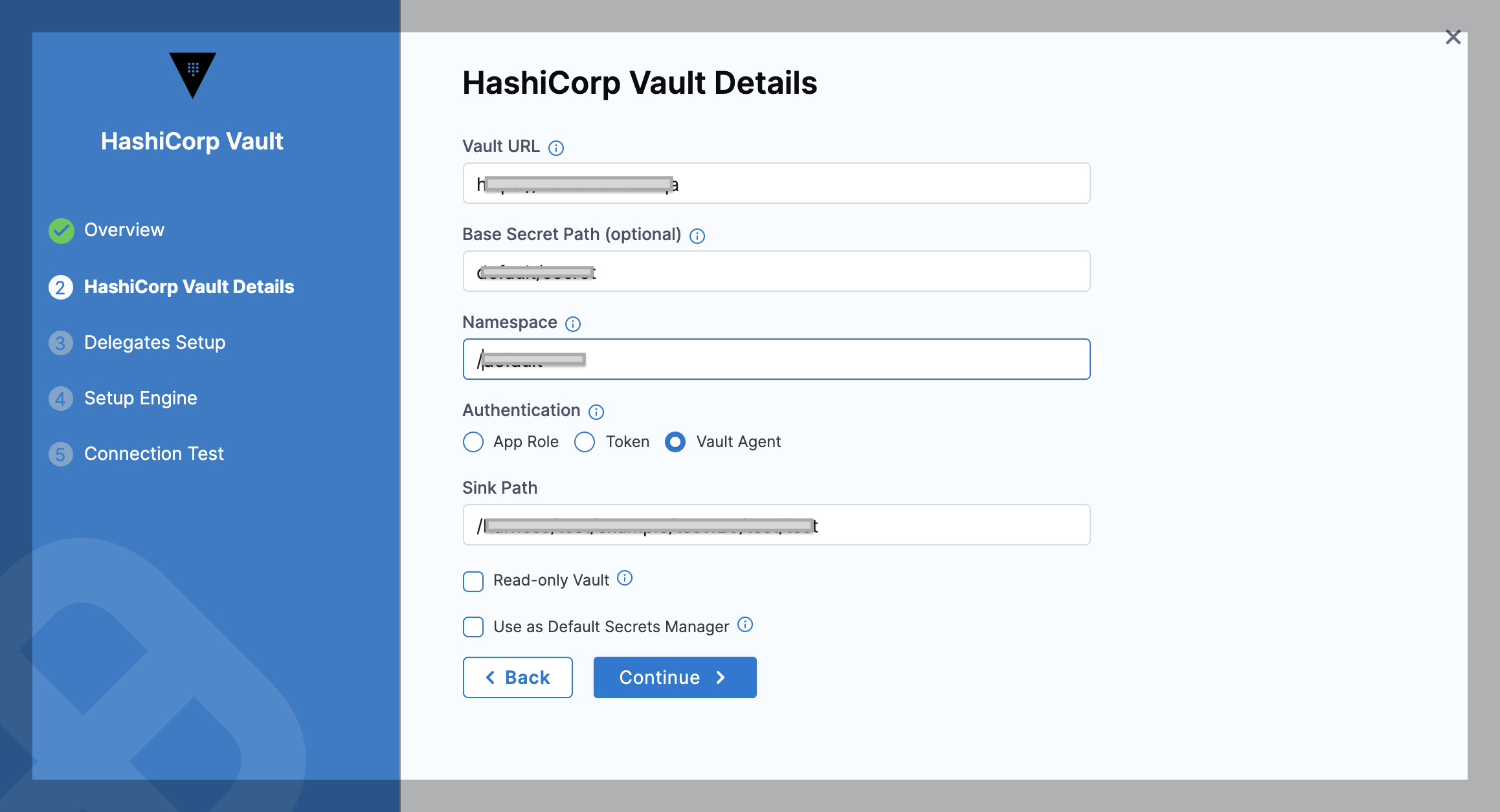 This option provides an automated mechanism to retrieve a Vault token for IAM principals and AWS EC2 instances. With this method, you do not need to manually install or supply security-sensitive credentials such as tokens, usernames, or passwords.

In the AWS Auth method, there are two authentication types:

Harness recommends using the IAM technique for authentication since it is more versatile and complies with standard practises.

To authenticate with AWS Auth, make sure you have configured the vault with entries for Header, Role, and Region. For more information, see AWS Auth Method.

You must add the Server ID Header from Vault as a Harness Encrypted Text Secret and select it for Server Id Header in Harness. 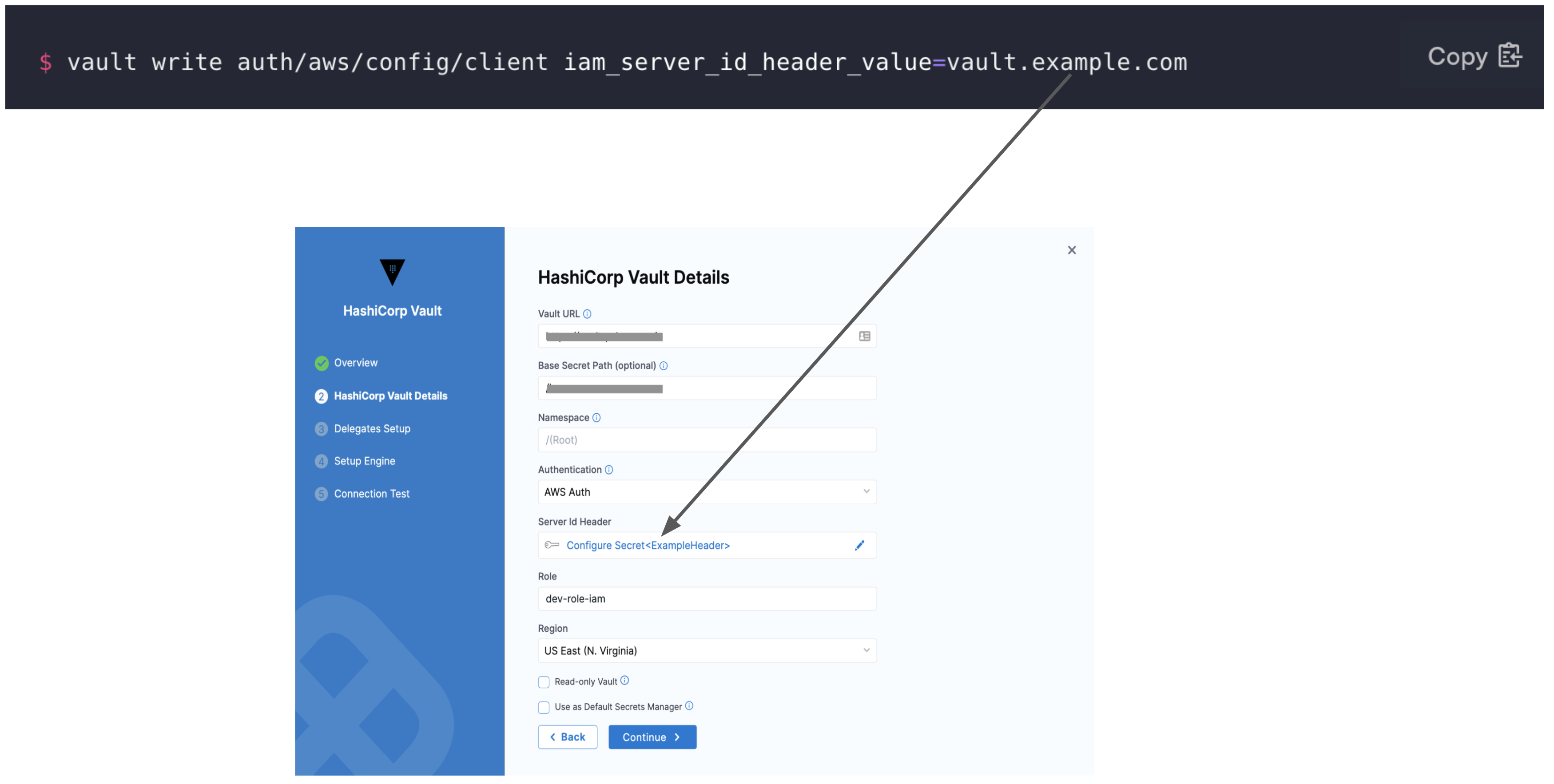 In Role, enter the role you have configured in the Vault. 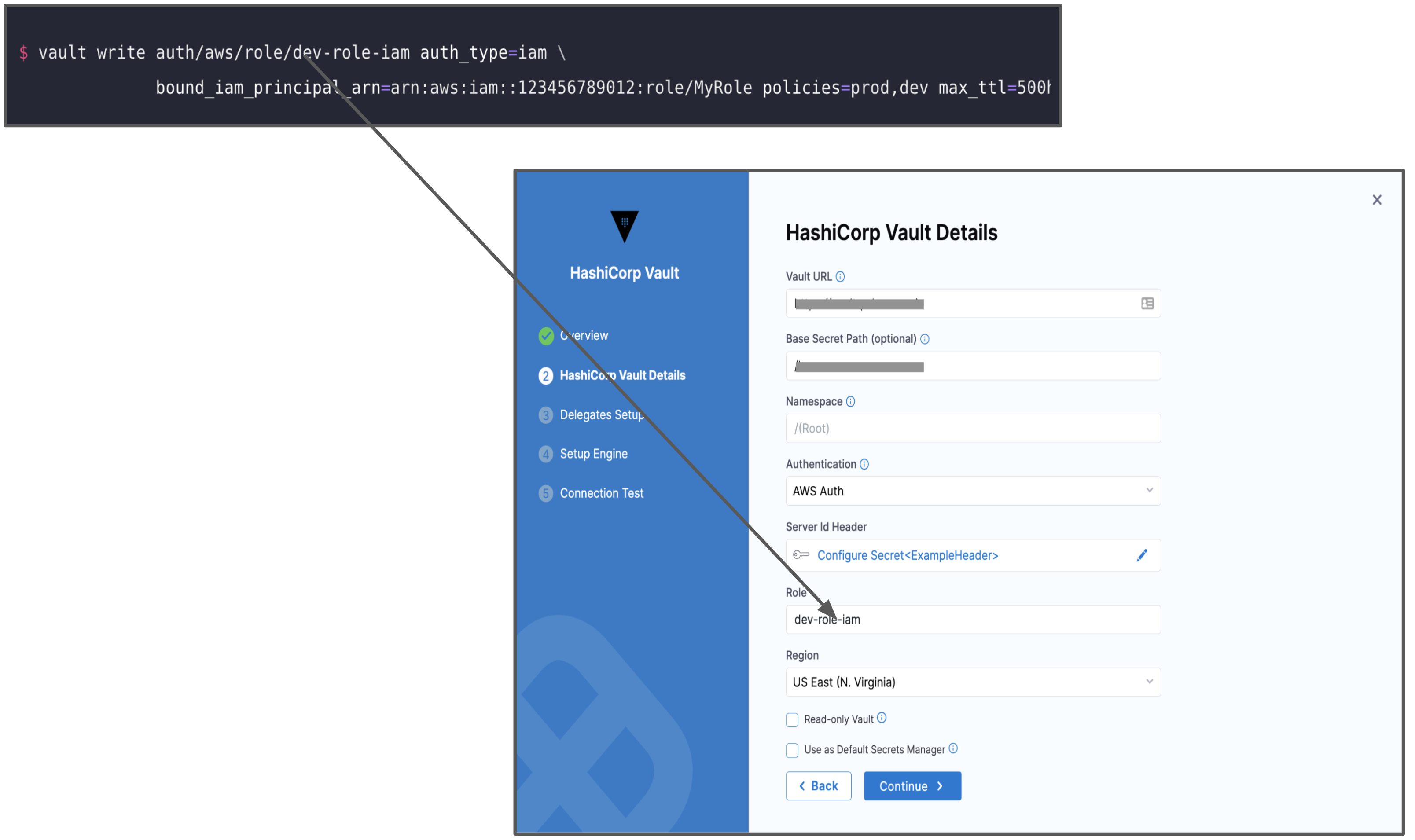 In Region, enter the AWS Region for the Secret Manager.

This option uses a Kubernetes Service Account Token to authenticate with Vault. With this method of authentication, you can easily add a Vault token into a Kubernetes Pod.

To authenticate with Kubernetes Auth, make sure you have created a role in the vault inside auth/kubernetes/role. This role authorizes the "vault-auth" service account in the default namespace and it gives it the default policy. This is also where you'll find the service account name and namespace that will be used to access the vault endpoint.

In Role Name, enter the role you have configured in the Vault.

In Service Account Token Path enter the JSON Web Token (JWT) path. This is the path where the JWT token is mounted. The default path of this token is /var/run/secrets/kubernetes.io/serviceaccount/token.

Once you have entered the required fields, you can choose to Fetch Engines or Manually Configure Engine.

If you want Harness to automatically fetch secret engines, include this read permission for sys/mounts In the ACL policy.

Harness will populate the Secret Engine drop-down with the list of engines and their versions.

Select the engine you want to use.

If you don’t want to or cannot add the ACL policy (with read permission for sys/mounts) in the Secret Manager, perform the following steps:

You cannot change the Secret Engine later. Harness blocks editing this setting later since there might be secrets that are created/referenced under this secret engine. Changing the secret engine might break references to those secrets.

In Renew Interval, you can (optionally) enter how often the Harness Delegate reloads the Vault access token.

You can expect a delay during the Vault renewal. A periodic job runs to check if there has to be a renewal, resulting in a delay of no more than two minutes.

To validate a non-read-only Vault Secret Manager, Harness creates a dummy secret in the secret engine.

The path of the secret is as follows:

The secret can fail because of various reasons.

If required by your organization's security practices, select the Read-only Vault check box. This selection authorizes Harness to read secrets from Vault, but not to create or manage secrets within Vault.

Once you have filled out the required fields, click Finish.

If you select Read-only Vault, there are several limitations on the resulting Harness Vault Secret Manager.

Once the Test Connection succeeds, click Finish. You can now see the Connector in Connectors.