This topic describes how to provision a CD stage's target deployment infrastructure using the Terraform Plan and Apply steps.

You use the Terraform steps to run the Terraform script and supporting files from your repo. Harness uses the files to create the infrastructure that your Pipeline will deploy to.

Next, you map the script outputs Harness requires to target the provisioned infrastructure, such as namespace.

To provision non-target infrastructure, add the Terraform Plan and Apply steps to the stage Execution section instead of the Infrastructure section.

See Install Software on the Delegate with Initialization Scripts.

These steps assume you've created a Harness CD stage before. If Harness CD is new to you, see Kubernetes CD Quickstart.

We'll start in the stage's Infrastructure section because the Service settings of the stage don't have specific settings for Terraform provisioning. The Service manifests and artifacts will be deployed to the infrastructure provisioned by Harness and Terraform.

In the CD stage, click Infrastructure. If you haven't already specified your Environment, and selected the Infrastructure Definition, do so.

The type of Infrastructure Definition you select determines what Terraform outputs you'll need to map later.

In Dynamic provisioning, click Provision your infrastructure dynamically during the execution of your pipeline.

Harness automatically adds the Terraform Plan, Harness Approval, and Terraform Apply steps. You can change these steps, but plan, approve, and apply is the most common process. We use that process in our Terraform documentation.

The Terraform Plan step is where you connect Harness to your repo and add your Terraform scripts.

In Name, enter a name for the step, for example, plan.

Harness will create an Entity Id using the name. The Id is very important. It's used to refer to settings in this step.

In Timeout, enter how long Harness should wait to complete the Terraform Plan step before failing the step.

In Command, select Apply. Even though you are only running a Terraform plan in this step, you identify that this step can be used with a Terraform Apply step later.

The Provisioner Identifier is a Project-wide setting. You can reference it across Pipelines in the same Project.

For this reason, it's important that all your Project members know the Provisioner Identifiers. This will prevent one member building a Pipeline from accidentally impacting the provisioning of another member's Pipeline.

Select a Secrets Manager to use for encrypting/decrypting and saving the Terraform plan file.

A Terraform plan is a sensitive file that could be misused to alter resources if someone has access to it. Harness avoids this issue by never passing the Terraform plan file as plain text.

Harness only passes the Terraform plan between the Harness Manager and Delegate as an encrypted file using a Secrets Manager.

When the terraform plan command runs on the Harness Delegate, the Delegate encrypts the plan and saves it to the Secrets Manager you selected. The encrypted data is passed to the Harness Manager.

When the plan is applied, the Harness Manager passes the encrypted data to the Delegate.

Configuration File Repository is where the Terraform script and files you want to use are located.

Here, you'll add a connection to the Terraform script repo.

Select or create a Connector for your repo. For steps, see Connect to a Git Repo or Artifactory Connector Settings Reference (see Artifactory with Terraform Scripts and Variable Definitions (.tfvars) Files).

If you're simply experimenting, you can use HashiCorp's Kubernetes repo.

In Git Fetch Type, select Latest from Branch or Specific Commit ID. When you run the Pipeline, Harness will fetch the script from the repo.

Specific Commit ID also supports Git tags.If you think the script might change often, you might want to use Specific Commit ID. For example, if you are going to be fetching the script multiple times in your Pipeline, Harness will fetch the script each time. If you select Latest from Branch and the branch changes between fetches, different scripts are run.

In Branch, enter the name of the branch to use.

In Folder Path, enter the path from the root of the repo to the folder containing the script.

For example, here's a Terraform script repo, the Harness Connector to the repo, and the Config Files settings for the branch and folder path: 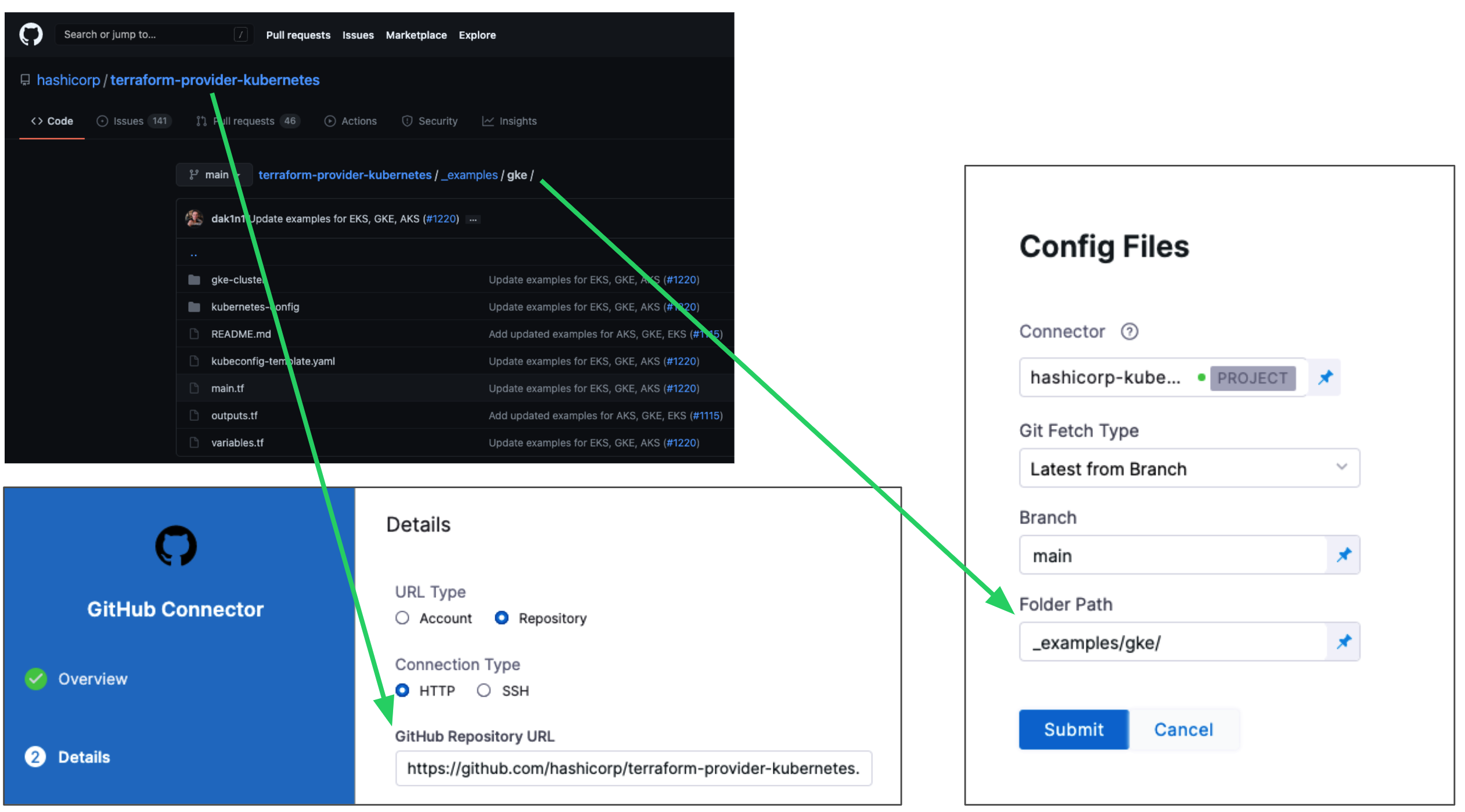 You can jump ahead to the Terraform Apply step below. The following sections cover common Terraform Plan step options.

When you set up the file repo in Configuration File Repository, you use a Harness Connector to connect to the repo where the Terraform scripts are located.

Some scripts will reference module sources in other repos and Harness will pull the source code for the desired child module at runtime (during terraform init).

In Source Module, you can select Use Connector credentials to have Harness use the credentials of the Connector to pull the source code for the desired child module(s).

If you do not select Use Connector credentials, Terraform will use the credentials that have been set up in the system.

The Use Connector credentials setting is limited to Harness Git Connectors using SSH authentication (not HTTPS) and a token.

Workspaces are useful when testing changes before moving to a production infrastructure. To test the changes, you create separate workspaces for Dev and Production.

A workspace is really a different state file. Each workspace isolates its state from other workspaces. For more information, see When to use Multiple Workspaces from Hashicorp.

Here's an example script where a local value names two workspaces, default and production, and associates different instance counts with each:

In the workspace interpolation sequence, you can see the count is assigned by applying it to the Terraform workspace variable (terraform.workspace) and that the tag is applied using the variable also.

Harness will pass the workspace name you provide to the terraform.workspace variable, thus determining the count. If you provide the name production, the count will be 3.

In the Workspace setting, you can simply select the name of the workspace to use.

You can also use a stage variable in Workspace.

Later, when the Pipeline is deployed, you specify the value for the stage variable and it is used in Workspace.

This allows you to specify a different workspace name each time the Pipeline is run.

You can even set a Harness Trigger where you can set the workspace name used in Workspace.

The Terraform Var Files section is for entering and/or linking to Terraform script Input variables.

You can use inline or remote var files.

You can add inline variables just like you would in a tfvar file.

Provide the input variables and values for your Terraform script. Harness follows the same format as Terraform.

For example, if your Terraform script has the following:

In Add Inline Terraform Var File, you could enter:

If you are entering secrets (for credentials, etc.), use Harness secret references in the value of the variable:

You can connect Harness to remote variable files.

Select your Git provider (GitHub, etc.) and then select or create a Connector to the repo where the files are located. Typically, this is the same repo where your Terraform script is located, so you can use the same Connector.

In Branch, enter the name of the branch.

In File Paths, add one or more file paths from the root of the repo to the variable file.

For example, if your config.tf file has the following backend:

You can use Harness secrets for credentials. See Add Text Secrets.

You can use the Targets setting to target one or more specific modules in your Terraform script, just like using the terraform plan -target command. See Resource Targeting from Terraform.

You simply identify the module using the standard format module.name, like you would using terraform plan -target="module.s3_bucket".

If you have multiple modules in your script and you don't select one in Targets, all modules are used.

If your Terraform script uses environment variables, you can provide values for those variables here.

You can use Harness encrypted text for values. See Add Text Secrets.

In Advanced, you can use the following options:

By default, Harness adds an Approval step between the Terraform Plan and Terraform Apply steps. You can remove this step or follow the steps in Using Manual Harness Approval Steps in CD Stages to configure the step.

The Terraform Apply step simply inherits its configuration from the Terraform Plan step you already configured.

As stated earlier, you use the same Provisioner Identifier in the Terraform Plan and Terraform Apply steps:

In Terraform Apply, enter a name for the step. The name is very important, as you'll use it to select the outputs from the Terraform apply operation.

For example, if you name the Terraform Apply step apply123 and you want to reference the region output in your script, you'd use the expression:

The mapping is explained in the next step.

In Timeout, enter how long Harness should wait to complete the Terraform Apply step before failing the step.

In Configuration Type, select Inherit From Plan. If you select Inline, then you aren't using the previous Terraform Plan step. You are entering separate Terraform files and settings.

Now that the Terraform Plan and Terraform Apply steps are set up in Dynamic provisioning, Harness is configured to provision the infrastructure defined in your Terraform script.

The required settings are specific outputs from your Terraform script. Which settings are required depends on the type of target infrastructure you are provisioning/targeting.

For example, a platform-agnostic Kubernetes cluster infrastructure only requires the target namespace in the target cluster.

Create the FQN expression for each output.

For example, for a Kubernetes deployment, you need to map the namespace output to the Namespace setting in Infrastructure Definition.

So for a Terraform Apply step with the Id apply123 and an output named namespace, the expression is:

Here you can see how the expression is created from the Terraform Apply step name and the Terraform script (output.tf, config.tf, etc):

Use the expressions to map the outputs in the required Infrastructure Definition settings, such as namespace in Cluster Details. Now Harness has the provisioned target infrastructure set up.

You can complete your Pipeline and then run it.

Harness will provision the target infrastructure and then deploy to it.

The Terraform Rollback step is automatically added to the Rollback section.

Enter a name for the step.

When rollback happens, Harness rolls back the provisioned infrastructure to the previous successful version of the Terraform state.

Harness won't increment the serial in the state, but perform a hard rollback to the exact version of the state provided.

Harness determines what to rollback using the Provisioner Identifier.

If you've made these settings expressions, Harness uses the values it obtains at runtime when it evaluates the expression.